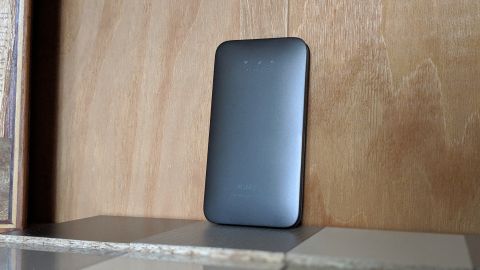 The KiMiFi K5 is an average product at best. It is hard to justify a PAYG model with expensive hotspot hardware when other better and cheaper alternatives exist. Even if you want the convenience of the CloudSIM, rivals like Glocalme do a better job.

The death of the desk-and-office-bound 9-to-5 schedule has been fuelled partly by the rise of the working nomad – business travelers who have been criss-crossing the world, going where they are needed.

Connectivity on-demand has been the catalyst that’s made all this possible with roaming charges falling significantly over the past decade. Startups like KnowRoaming or Nuu Konnect have been instrumental in that process, and a newcomer, KiMiFi, wants a piece of this pie with the K5 4G Global Wi-Fi Hotspot (or router).

You can buy the Wondafone KiMiFi K5 from Indiegogo for $79 with 1GB data right now as an early bird price.  Opt for 30 days unlimited global data for $119. Note that the official suggested retail price is $139. The sample was sent by the manufacturer.

The K5 looks like one of those anonymous battery chargers that are so common on Amazon. Its plastic enclosure is utilitarian, in line with the fact that it is a single-function device: there’s no screen, just three icons that light up to indicate the status of connectivity, Wi-Fi and battery. At 127.5 x 65.5 x 13mm with a weight of 130g, it is about the size of a traditional smartphone and is charged via microUSB; bear that in mind if you carry around a Type-C charger/cable.

You can easily remove the front cover to find the security details (Wi-Fi SSID, password, a QR code and the IMEI). There’s also a spare SIM card slot which is designed for customers who have purchased a local SIM and want to use data. In that scenario, they can use KiMiFi as a hotspot.

Connecting to the Wondafone was seamless and we managed to get it up and running within minutes. We tried the service in Central London, in our Paddington offices, with Vodafone as the roaming partner, running a number of benchmarks with the main speed test providers.

The KiMiFi K5 can power up to five devices and has a 14-hour battery life thanks to an internal 3,500mAh battery. The company partners with Uglocalme to deliver 4G coverage in more than 130 countries using a CloudSIM (i.e. a non-user configurable embedded SIM chip).

According to Wondafone, the card has 21 4G/LTE bands and uses 22 data centers and six Amazon AWS across the world to deliver the service. As for the device, it comes with on-board encryption and a two-year life expectancy. Wondafone also claims support for the top three mobile operators in every country where it operates.

Rates seem to be competitive: a 1GB 7-day package for mainland China costs $4 while the same package for the US can be had for $9. Monthly and annual passes are also available, although one might argue, it will be far more cost-effective to go for a local solution instead. Note that the device doesn’t have 802.11ac Wi-Fi connectivity.

Android and iOS apps are available and allow you to top up your account, buy new packages and check data usage. No clever tricks here, just a simple, straightforward, minimalist app.

There are plenty of rivals out there, split into three categories. You can use your own smartphone and your current SIM to roam in countries you visit. You can either use an unlocked dongle or a secondary phone (with hotspot capability) or your own smartphone (if it is a dual-SIM model) with a local SIM. The third option is to have a dedicated Wi-Fi hotspot like the K5.

UK mobile phone customers will have European roaming bundled, with some non-European countries usually bundled in. Three, for example, has 71 territories listed in its Go Roam destination list (including the likes of Chile and Hong Kong). Depending on your data package, you can get up to 13GB of data per month and can upgrade to unlimited data for £5 per day. Three offers unlimited packages for as little as £20 per month at the time of writing.

(Note: Three has confirmed that you can’t buy a data SIM or a PAYG SIM card preloaded with credit and activate it in a Go Roam destination. You will have to be in the UK).

You can buy a local SIM at your destination, usually at the airport, and use it almost immediately. You won’t have to remember to load some credit onto your KiMiFi account beforehand (also bear in mind that your phone has to connect to the internet to kickstart the hotspot).

The third category is for those who don’t want to deal with the hassle of swapping SIMs. KnowRoaming has been a favorite of ours with the Global SIM Card + 7 Days Unlimited Data being its most popular option. In a nutshell, you pay $23 to get 4G unlimited data in 120 countries and territories, and voice in an additional 80. In addition, KnowRoaming has an optional subscription service called ReachMe that allows you to receive incoming calls to your home mobile number while abroad.

Any conclusion for the KiMiFi needs to tackle two separate aspects: the hardware and the service.

In the case of the hardware, the verdict is easy. We wouldn’t pay $140 for a hotspot like this when you can get a Huawei 4G hotspot with a small display for less than half the price. You don’t need to download an app to use it and you can pretty much load a SIM card and start using it straight away. Even better (and cheaper), if you have a spare Android smartphone, you can use that as a hotspot and share its connection with up to five users.

As for the service, there are cheaper options as highlighted earlier. We got good download speeds but that was probably down to the fact that our offices are centrally located. When it comes to connectivity your mileage will vary significantly. We strongly advise users to get local SIMs where possible when abroad since roaming partners are unlikely to get priority when it comes to traffic.