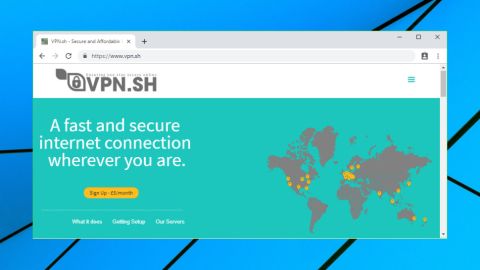 We've come across many terrible VPNs, but none have failed as spectacularly as VPN.sh, which couldn't provide any service or respond to questions. Avoid.

Browsing a VPN provider's website can often give you clues about the type of service you'll get, and VPN.sh is one of the best examples of this we've seen. (And no, we don't mean that in a good way.)

The site opens with a misleading claim – namely that it can help give you a fast internet connection – then talks about the generic benefits of a VPN, while not mentioning any specific features. That's usually a clue that it doesn't have any.

The Servers page named 38 servers across North America, Europe, Asia and Australasia, but, astonishingly, only eight of them were online: Canada, US, Russia, Hong Kong, two in Australia and two in New Zealand.

A good VPN will always be working on its service and updating its site. The latest news on the VPN Clients page dates back to 2017, and the website copyright date on the front page is 2016.

Having a wide range of apps can indicate that a provider has real resources behind it, but VPN.sh provides none at all. You must set up the service manually, via clients such as OpenVPN GUI.

The quality of a support site can tell you a lot about a service. VPN.sh has a grand total of eight articles: five of those relate to service updates, mostly from 2015, one is a list of server names, and the others cover login issues and cancelling your account.

If that's not put you off – and it really, really should – pricing options are limited, with just two plans available at £5 ($6.50) per month, or £4.16 ($5.42) on the annual subscription. That looks expensive to us, especially considering some quality services can charge under $3 monthly for their two or three-year plans.

We know it uses OpenVPN, for instance, but the company doesn't explain how its configuration files set this up. Experts can look at the file's settings to figure that out, but everyone else will be left in the dark.

"We use your IP address to help diagnose problems with your connection to our servers."

Unfortunately, that raises more questions than it answers. Which IP address? Incoming, presumably, but then it must be tied to a session if it's going to be linked back to an account. So does the service also log start dates and times, bandwidth used, anything else? How long is this data kept?

VPN.sh has other privacy problems, too, and these start when you sign up, and the website asks for your email, name, physical address and phone number. Anonymity, who needs it?

Most VPNs make it very easy to sign up and start using the service. We can often be up and running within two or three minutes. VPN.sh? Not so much.

Problems were apparent as soon as we paid via PayPal, and the website left us at an invoice page displaying a large 'Unpaid' graphic. We'd just paid, so that would be a mistake, right?

Moments later, a confirmation email explained that our order would be 'processed shortly', but we would have to wait for it to be set up. Wait? Most providers allow access immediately, why should there be any delay?

Our guess would be that VPN.sh doesn't have an automated system to handle new customers. Signups perhaps raise email alerts to the company, and accounts must be set up manually. That's not encouraging – it suggests a provider doesn't have the resources or expertise to run the business properly – but we could live with this, as long as new accounts are activated within minutes.

VPN.sh didn't activate our account quickly, though. An hour went by, then two hours, eight, twelve. A day went by – and still nothing. The website said that if we hadn't received anything after 24 hours, we should raise a support ticket, so after waiting for 30 hours, that's exactly what we did.

A follow-up email confirmed that our ticket had been raised, and we would be notified when there was a response. We would expect this kind of question to get a very speedy reply, but again, the hours went by, then a day, and still nothing.

Just to be fair, we raised a second ticket, confirming our information – here's the account email, here's the PayPal transaction showing we've paid – and asking for a response. Another day went by, and more, without a reply.

We could speculate about potential reasons for this. Some disaster that's happened to the business, or its staff, or its providers, that has taken it temporarily offline, but it's only a short-term issue, and everything will eventually be fine.

But from what we see on the website, VPN.sh hasn't been fine for some time. Most servers are down, there is no web-based support, no significant updates for more than a year, no sign at all that anyone has the faintest interest in maintaining the business or looking after customers. Those issues alone are enough to tell you to run, fast, in the opposite direction, and don't look back.

VPN.sh seems to be a shell of a service which can take your money, but isn't able to keep its servers online, update its website, respond to support tickets or do anything else that indicates the tiniest sign of life. Don't just ignore VPN.sh, block it in your HOSTS file.