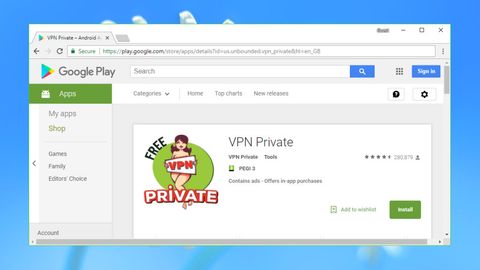 Unless you need torrent support, there's no compelling reason to choose VPN Private ahead of the competition.

VPN Private is one of the most popular free VPN apps for Android, with Google Play reporting an amazing 5-10 million installs so far.

A quick look at the app's store page gives us plenty of clues to help explain this success. VPN Private claims to support more than 20 countries, all servers are P2P friendly, there are no bandwidth limits, and the app is entirely free.

There are issues, too. The developer proudly boasts "this app is 100% free!!!!", for instance, but look closely and you'll notice the standard Google Play warning that it contains ads.

The developer doesn't mention any limits or restrictions, either, but the Play store's mention of in-app purchases suggests there's something important you're not being told. (And there is – more on that below.)

A commercial Premium VPN plan drops the ads, claims to offer a better network and more speed, but is priced at a ridiculously expensive £11.49 ($16) a month dropping to £5.42 ($7.60) if you subscribe for a year.

To put that in perspective, signing up for Private Internet Access currently costs $6.95 (£4.70) a month, $3.33 (£2.40) on the annual plan or $2.91 (£2.10) if you pay for two years upfront, and that gets you a far better and more complete service which supports up to five devices rather than one. VPN Private may work as a free app, but it's very hard to see why anyone would pay for the commercial plan.

Most VPNs do their best to reassure you that your online activities aren't being logged, and VPN Private is no different. There are "no logs" the Google Play blurb proudly states.

Experience tells us these headline claims are often misleading, though, and VPN Private doesn't provide any further information to prove its no-logging case. There is no website, no privacy policy, and no indication of who is behind the service other than a single email contact and an address in the Ukraine.

While none of this is evidence that the developer is doing anything wrong, it also means we have no way to assess potential risks, and no reason to trust the firm.

Even if the developer is entirely honest, there's still scope for problems. Will the developer own and manage all VPN Private's servers, for instance? We suspect not, in which case how can the company be sure what information might be logged on those servers, and how those logs are managed?

We moved on to check out the app's permissions, often a handy indicator of a service which is overstepping the privacy boundaries. In this case, VPN Private only asked for permissions we would expect: 'receive data from Internet', 'view network connections', 'full network access', 'run at startup', 'control vibration' and 'prevent device from sleeping'.

A quick look at the app code revealed that much of it was taken from an OpenVPN for Android project. There's no problem with that – it's open source, that's what it's for – and, if anything, it reassures us that the app will correctly establish and manage your VPN connections.

VPN Private also contains code to display Google ads, which could result in you leaving traces in logs elsewhere. It's unlikely these would reveal very much, though, even if an attacker were to find them, and there's no more risk here than you face when using any ad-sponsored app.

VPN Private installs much like any other Android app, and the simple interface is almost as familiar: a list of locations, a Connect/ Disconnect button and a menu with a few useful options. If you've ever used another VPN you'll immediately feel at home.

Tapping the Location list revealed only three options: France, United Kingdom and United States. What about the 20+ locations we were promised?

A link offers the chance to 'Add more locations', but then prompts the user to give the app a 5-star rating on Google Play. It's easy to see how a newcomer could rush off to give VPN Private full marks before they've even used it, just to get access to all the servers.

Select a country, tap Connect and you're ready to go within seconds. The app doesn't display your new IP by default, but tapping an IP Address link opens a browser window which details your virtual identity in full.

Once you're connected, VPN Private displays a 60-minute countdown timer. Leave this alone and the connection will automatically close when it hits zero. This isn't quite as bad as it sounds, because you can tap Reset at any time to reset the timer to 60 minutes. It's a hassle, though, and also potentially a privacy issue if your traffic is routed through your regular connection, giving away your real IP address, because the VPN has closed.

By this stage you'll have noticed the ads, too. A small area on the main console displays a new ad every minute or two. A full screen ad pops up when you click Connect. There's also a small ad in the 'Are you sure?' prompt when you disconnect, and another full-screen ad after that. It's enough to be annoying, but we've seen worse (video ads, pop-ups that appear over other app screens), and overall it's nothing you won’t have seen before.

Our website unblocking tests found VPN Private was only moderately successful. We were able to watch BBC iPlayer while connected to the UK server, but Netflix and protected YouTube content remained stubbornly locked.

Our performance checks gave similarly mixed results. UK to UK download speeds averaged a disappointing 10Mbps, and moving out into Europe saw speeds drop further, sometimes dramatically (9Mbps to France, 2Mbps when connected to the Netherlands). But UK to US connections managed 15 to 20Mbps, good news if you're planning some heavy duty torrenting, streaming or other big download task.

We had more success with the leak tests where VPN Private always assigned us a new IP in our requested country, while also blocking all DNS and WebRTC leaks.

The good news continued to the end of the review, as we explored VPN Private's various settings. There are options to change the UI to one of 17 languages, and it’s possible to set your protocol to OpenVPN or IPSec, a choice you don't often get with other free VPN apps. You can also be warned to use the VPN when connecting to insecure wireless networks.

VPN Private offers more locations than many free VPN apps, and P2P support is unusual, too. Speeds are below par, though, and with no details on the provider or the network, we wouldn't trust the app with anything important.