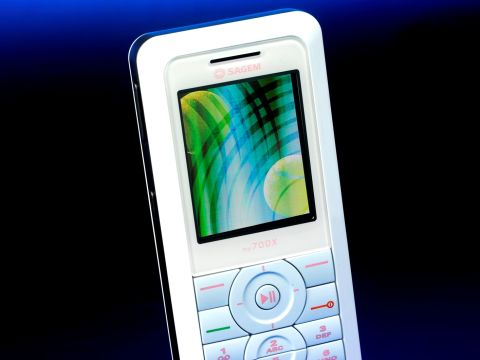 The white version is suitably iPod-esque in its approach

A good quality phone with an excellent MP3 player

They might not have the highest profile, but French manufacturer Sagem has developed a solid reputation for producing handsets that offer value for money by packing in enticing features at an eye-catching price tag.

The my700x is the latest Sagem handset to make full use of this approach. You can pick this up at £155 SIM-free, making it £50 less expensive than the Nokia or Sony Ericsson would cost without network ties, and making it practically the same cost as an unlocked RED SLVR. But it can shoot 2-megapixel pictures, has a good MP3 player, quad-band operation, and throws in a handy FM radio.

The design will also appeal to many. The white version is suitably iPod-esque in its approach - although the pink lettering and floral design make it clear that it is going for an obviously more girly image than the Apple music machine.

Those who want something more gender-neutral can opt for the dark-brown/silver version. Whichever way, it is a small package; it is thinner than the Nokia and Sony Ericsson, and although is not as slim as the Motorola, it does occupy a smaller footprint. The curious button layout with irregular shaped keys impresses the eye but may prove less pleasing in long term use.

The phone boasts a simple 1.3-megapixel camera - but you can set the camera up to shoot 2- megapixel images, thanks to a buried resolution option that allows the phone itself to interpolate the size of the image upwards.

Pictures taken at this top setting show good detail and are of a generally pleasing standard (although in terms of colour and clarity they are not quite as good as those taken on the 6233 or W700i in our Group Test).

The MP3 player puts on a good performance, and we were particularly pleased to see the provision of an equaliser that allows you to adapt tonal reproduction to suit your musical taste and the quality of your headset.

The FM radio is similar in sophistication and signal strength to that found on many Nokias (including the 6233). There is a healthy 32MB of memory on offer, even before you start investing in your own miniSD cards.

Our one major gripe about the phone is the quality of the screen. It is the smallest of the quartet on trial but it is the clarity that disappoints. The main menu screen, which provides a busy desktop of icons, suffers because of the lack of detail.