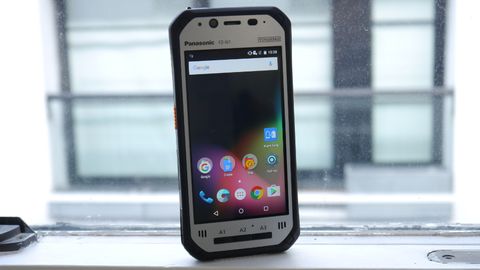 Panasonic should sell this device with a detachable barcode scanner and the company would have a winner on its hands. As it stands, the FZ-N1 is perfect in a work environment but would look odd anywhere else. It does what it says on the box and the scanning capabilities are first class.

Panasonic had a brief stint in the consumer smartphone market with the Eluga range and the Lumix DMC-CM1, but both proved to be underwhelming products prompting the Japanese company to swiftly exit that market (except for India and Japan) and focus on the more lucrative enterprise, ruggedized smartphone arena with its Toughpad brand.

The Android-powered FZ-N1 was launched earlier this year at MWC and is available as a Windows 10 IoT Mobile Enterprise smartphone (the FZ-F1).

Funnily enough, Panasonic calls it an electronic tablet rather than a phablet or a smartphone, which makes sense given that there's one version with Wi-Fi only. It has the same footprint as an Apple iPhone 6 Plus although it is far thicker thanks to a unique feature.

It integrates a bulky 1D/2D barcode reader with a Class-2 1mW laser, one powerful enough to produce a visible red cross (see below). This isn't as cool as the heat sensor on the Cat S60, but it's probably far more useful for most end-users such as warehouse operators.

Sadly, as mentioned this addition translates into a much thicker device (30mm at its thickest – and this handset is heavy as well at just under 280g). Panasonic went for the practical rather than aesthetics here with an angled, rear-facing but ergonomic design that keeps the display clearly visible when scanning (in most scenarios).

Otherwise, as is the case with traditional handheld scanners with the reader located on the top frame, you end up awkwardly holding the device while simultaneously trying to aim and read the display – which is hardly ideal.

So, this is no slip-in-your-pocket smartphone. It is a ruggedized device aimed at a very specific market, one that requires a smartphone that can handle voice and data as well as surviving some pretty tough conditions like drops on hard surfaces, downpours, heat and so forth, while still being expected to function normally.

Given all this, unsurprisingly the phone is certified MIL-STD 810G and has an IP67 rating (but not IP68).

Connectivity includes NFC, Bluetooth 4.1, 802.11ac Wi-Fi, a micro-USB port and a proprietary docking station connector. That's the sort of hardware you'd expect on a £100 smartphone like the Vodafone Smart 6 Ultra.

A few points to note: the headphone and micro-USB sockets are covered. And there are two yellow programmable buttons, one on each side of the device.

There's also a physical camera button, a power switch, a volume rocker, no less than three microphones with noise suppression and a pair of front speakers that reach 100dB according to the manufacturer. A quick spin on YouTube convinced us that they were indeed pretty powerful, and good enough, certainly, on a noisy building site or indeed next to a jumbo jet.

The design of the case is very well thought out – there are holes for straps and a lockable flap for the user-replaceable battery (a quick-charging 3,200mAh one). You need to remove it in order to access the SIM cards and the microSD card.

Expect up to 24 hours' worth of talk time with a standard battery and 12 hours for straight barcoding.

Panasonic has incorporated a useful feature that allows you to 'warm-swap' batteries – you get 30 seconds to exchange the batteries which should be plenty of time. A 6,200mAh long-life battery pack is also available.

The front of the device hosts the speakers each side of three physical, customisable buttons labelled A1, A2 and A3, plus the trio of capacitive touch buttons usually found on almost all Android smartphones.

However, once you load apps, you get the full functionality associated with six different buttons.

Panasonic chose to use a combination of hard plastic (ABS) and hardened rubber for the enclosure rather than soft rubber like the Cat S60 or the Blackview BV6000. The end result is something that looks a bit classier than the competition.

There are also tiny protruding rubber studs that protect the back of the smartphone when laid flat on a table. Sadly, Panasonic designers missed a trick here by not adding an integrated stand so that the FZ-N1 could sit sideways on a flat surface.

The screen is another bright spot, quite literally. It can be read under bright sunlight – although you will have to push the brightness up to maximum. We would have preferred a larger display, which is especially useful when you're wearing gloves, but that might have meant a bigger chassis for protection.

With a quoted 500-nits brightness and an anti-glare, anti-reflective coating (it uses direct bonding), the display can be used with a passive or active stylus pen.

Panasonic also bundled a few useful tools and utilities: hardware diagnostics, warm-swap, a dashboard, a device management tool, a barcode reader and a button custom configuration tool. Sadly, though, the device is still on Lollipop (Android 5.1.1) with no public plans to upgrade to Marshmallow or Nougat.

However, Panasonic's stance on upgrades is understandable. In a statement, the company said: "We will keep pace with the latest OS versions, but our enterprise and government customers generally prefer that we make updates at a minimum to help manage version control and reduce validation time.

"Since the N1 was developed during the v5.1 cycle, we will release the product with this version and make updates in the future. Typically, Toughpad updates OS versions about once every 12 months."

You won't find a fingerprint reader on this handset but it complies to FIPS140-2 Level-1 with built-in ARM TrustZone, and a plethora of accessories – from a bay cradle to a holster with belt – are available to cater for most needs.

With a full three-year warranty on parts and labour (which can be extended to five years and covering accidents), the Panasonic Toughpad FZ-N1 doesn't have a lot of competitors with the same hardware quality; we couldn't find any actually.

Which brings us to a quirk: The presence of two SIM cards and a 5-megapixel front-facing camera alludes to the possibility of using this smartphone as your day-to-day handset. We fail to see any scenarios where such a phone would be used off-site and away from work, especially since it has a laser.

As for the price, well, being the only device of its category, Panasonic is well placed to charge a premium for this smartphone. It has a great scanner and superb anecdotal battery life – it's just a shame that Panasonic didn't offer a barcode-less version of the N1 which may have given the rest of the rugged smartphone market a run for its money.