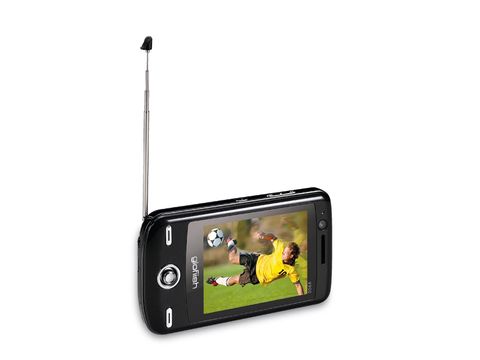 A well-specced phone, let down by its disappointing build quality and dodgy TV signal

E-TEN has made a name for itself by cramming features into its Windows Mobile devices, and the V900 (£464 inc. VAT) pulls off something quite spectacular in this respect – it has built-in TV.

The telescopic antenna pulls out of one corner of the hardware.

You get the full range of free-to-air channels via DVB-T, and several other broadcast standards are supported so you can use the V900 on your international travels.

Watch TV on your mobile

The 640 x 480-pixel, 2.8-inch screen does a good job of making programmes watchable, and the audio level is high. We'd have liked a 3.5mm connector for private listening, but you can get a converter for the 2.5mm connector easily enough.

Reception was good if we remained stationery, though even then we did experience some lost connections, but trying to watch TV on the move proved frustrating, as the signal broke up too much. We'd also have liked a stand to make propping the V900 up that bit easier.

Other novel features include an FM transmitter to accompany the FM radio. There's also a TV-out port and the necessary cables.

As for the rest, Windows Mobile 6.1 is augmented with the usual range of high-end features.

This is a 3G device with HSDPA. Wi-Fi, Bluetooth and GPS are built in. E-TEN includes a business card reader that uses the 3-megapixel main camera to photograph cards before turning them into contacts.

For all these features, the plastic build is a big disappointment, and we hated the mini joystick E-TEN has put on the front of the casing.