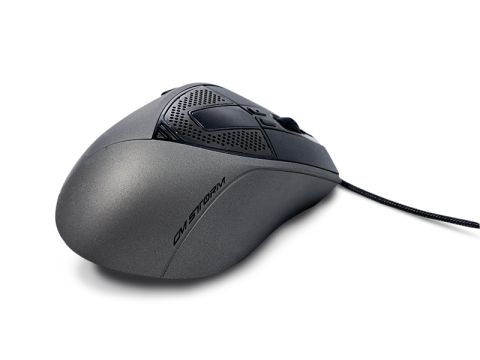 Cooler Master's gaming peripheral spin-off, CM Storm, has been making a serious name for itself in recent times.

First off its chassis have been making beautiful, and more than functional, homes for our most precious of components and it's also been making some rather tasty gaming mice too.

The £35 CM Storm Inferno didn't get such a great reception, but the Sentinel Advance split opinions between another reviewer and myself. I was impressed as the first mouse out of the CM Storm stable, though it didn't fair so well in a subsequent roundup.

But the Sentinel is back, this time in Z3RO-G trim. Essentially it's identical to the Sentinel Advance, though this time comes with a chunkier 128kb of onboard memory.

So now as well as storing profiles you can put a lowres, monochrome .BMP on the OLED screen. Oh and you get the instantly forgettable Shattered Horizon from Futuremark in the box too, as proof of why benchmarking software makers should stick to what they're best at…

It's still a good mouse though, and fully featured thanks to a serious software suite that enables you to get at every possible tweak you could want to perform.

Still, at £50 there are better mice out there, such as the R.A.T. 5, and you won't be paying for a dodgy game in the bundle.