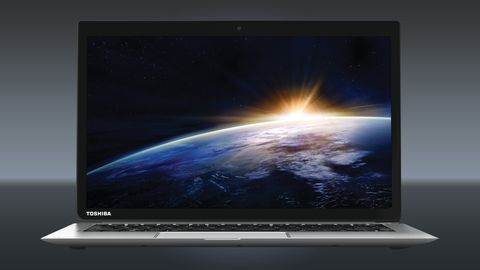 The Kira comes back into orbit

The Kira looks every bit its (slightly too expensive) price tag, but a dim display fails to make the most of its high resolution, which also frustrates due to Windows 8.1's scaling issues.

Toshiba's new Kira is a 2014 update to last year's model, which marked the company's first foray into premium Ultrabook territory. With a sleek chassis, still-impressive WQHD+ display and improved battery life, it joins a growing list of competing Windows Ultrabooks toting high-resolution, high-pixel-density displays. And there's a fair few of them.

For the Kira's entry price of £1,299 ($1,499, about AU$1,605), you could bag yourself a 13-inch MacBook Pro with Retina display, a Dell XPS 13 or a hybrid like the Lenovo IdeaPad Yoga 2 Pro or Asus UX301. In the business arena, the Lenovo ThinkPad X1 Carbon and Fujitsu Lifebook U904 also pack sharp screens, slim designs and the latest Intel Core processors.

After years of putting out dependable if slightly uninspired mid-range laptops, Toshiba's original Kira was a statement of intent, a flash Bentley coming off a production line of three-door hatchbacks. A spec boost to an already attractive Ultrabook is welcome, but is it enough to launch the Kira into pole position?

Apple hasn't yet launched its almost legendary MacBook Air with Retina, but if it did it'd probably look a bit like the Kira. Measuring 23mm at its thickest point, its body tapers toward the bottom making it appear thinner.

The black bezel surrounding the screen is eye-catching; not only is it thinner than what you would find on a MacBook Pro, it's part matte and part glossy which makes it a little more interesting to look at too.

The lid and base are coated in an attractive silver finish that's complimented by a shiny silver lining around the power button - which turns blue when activated, along with an orange Wi-Fi indicator - and trackpad.

Sure enough, the Kira is a very good (but not quite great)-looking machine that curiously loses appeal when the lid is closed. A silver Toshiba logo adorns its bottom left-hand corner, and its opposing square and rounded corners contrast effectively, but there's nothing here that screams premium.

Build quality is decent overall thanks to the Kira's magnesium alloy construction that uses a honeycomb structure. You'll only notice the flex on the underside of the base if you actively go prodding it, but the lid is worryingly bendable to the point that you'll want to avoid using it to pick the machine up.

Thankfully the hinge is sturdy enough to prevent the lid from wobbling, so you'll only have to touch the lid when opening and closing it - an act that takes two hands - one to prise it open and the other to hold the base steady. Four rubber feet on each corner of the base keep the machine sturdy when you're typing.

Though it was more of a standout feature on last year's version, the Kira's 13.3-inch WQHD (Wide Quad High Definition) PixelPure display still makes for impressive viewing, with high contrast levels that show off its deep blacks and solid colours.

The high quality of the display is partly because it's an IGZO (indium gallium zinc oxide) variant, the same type that's used in the iPad Air, which allows for higher pixel densities by using smaller semiconductor components.

It's far from perfect though: despite its solid color reproduction, the panel's image quality is hampered by a dim backlight, which maxes out at what feels like around 85% brightness. It's made worse by the display's highly reflective nature, which makes viewing its contents awkward in places like our brightly lit office - or outdoors.

The display features 10-point multi-touch, which is responsive and accurate. It may be questionable whether you would need touch on a non-hybrid model (especially for the added cost), but it certainly allows you to perform some tasks faster than using a trackpad or mouse.

The panel is made of Corning Concore glass, a type of glass designed for touch-sensitive panels that should protect against drops and scrapes.

Despite feeling quite compact for a 13-inch Ultrabook (mainly thanks to the thin bezel), the Kira doesn't provide a cramped typing experience. However, that's not helped by the fact that its chiclet-style keyboard keys aren't completely square; they're slightly wider than they are tall, which may take some adjusting.

A little more annoying is the small shift button on the left-hand side of the keyboard. If you're anything like me, you'll have to retrain your left pinky in order to hit it every time.

The Kira should never be chosen as your main sound system for house parties as its Harmon Kardon speakers are no substitute for a dedicated speaker and subwoofer system.

However, it bodes fine for personal listening and you can tweak the sound settings using its DTS Studio Surround app, which lets you alter the maximum volume output and bass boost, and there are settings to change between between 3D and surround sound. There's also an equaliser that allows you to play with a number of presets.