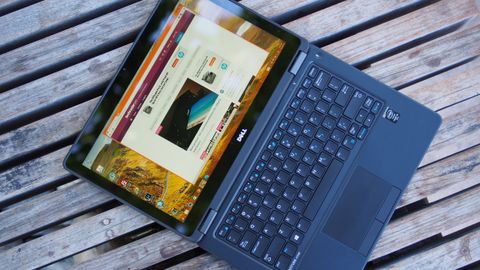 The Dell Latitude 12 7000 (E750) is an excellent business Ultrabook – it's upgradeable, comes with plenty of ports and is loaded with security options. The only thing that's preventing us from labeling the Latitude as a mobile workstation is the absence of a dedicated GPU.

The Dell Latitude 12 7000 Series E7250 ($1,079, £702, AU$1,452) is a compact business Ultrabook. If you can get over the understated appearance Dell has packed a bevy of ports, an array of wired and wireless connectivity options and enterprise-class security features into the compact frame of this 12.5-inch laptop.

With largely unchanged aesthetics from last generation's E7240 model, this year's Latitude 12 7000 Series (E7250) design is inoffensive, and may even appear slightly unremarkable at first blush. Comprised of a carbon fiber lid, metal chassis and black aluminum trim, the Latitude has a solid heft to it, giving it a sturdy and balanced feel when you pick it up.

What may appear as boring is actually the result of blending pragmatic design with modern aesthetics. Unlike slimmer consumer Ultrabook rivals, Dell chose to keep the rear profile of the Latitude boxy to accommodate a wide array of ports, negating the need for costly adapters that could become lost when traveling, as in the case of the uni-port MacBook.

The front portion of the laptop, unlike the completely rectangular Lenovo ThinkPad X250, is tapered, making the Latitude feel more modern. Despite this tapering, the black finish makes the Latitude 12 appear less "airy" than the aluminum-clad XPS 13 and MacBook Air.

On top, the lid is covered in a woven black and gray carbon fiber design, giving the laptop a soft, inviting feel and an interesting texture compared to Lenovo's implementation. The woven pattern is broken by a 3/4-inch black strip at the front where you lift the lid open. This is where the radio antennas are located. Dell design engineers informed me that because carbon fiber, like metal, blocks radio waves, this strip allows the laptop to receive Wi-Fi, Bluetooth, cellular and GPS signals.

The 12.5-inch full HD touchscreen is held securely to the body with two, upward-facing hinges. This design is similar to what is found on the Lenovo ThinkPad T450s, creating a sturdy hinge that allows the screen to articulate 180 degrees, far wider than the concealed hinge of the MacBook or EliteBook. On the lid near the right hinge, you'll find three LED indicator lights to quickly alert you to power, hard drive and battery states even if the laptop is closed. The LED lights are repeated again on the keyboard deck for quick access when the Latitude is open.

Designed to operate under harsh conditions, the Latitude 12 7000 is advertised as having passed MIL-STD-810G testing, allowing it to be used in a variety of environments, including low and high altitudes, extreme temperatures, drops and shocks, exposure to acid and saline, sand and dust, humidity and more. For users needing an even more rugged laptop, the Dell Latitude 12 Rugged Extreme ($3,649, £2,377, AU$4,909) should be able to survive most situations short of a nuclear explosion, but at the cost of price, size and weight compared to the non-rugged counterpart.

The Latitude 12 7000 (E7250) comes with a full-sized, backlit keyboard that's spill resistant. Accidentally spilled water will empty out through a small drainage hole on the bottom of the Latitude, helping to prevent damage to the laptop for butterfinger-proned business executives. There are two levels of brightness to the backlight, which helps to illuminate the keyboard for easy typing when working in dimmer environments.

The Latitude's boxy rear design is pragmatic considering the number of ports Dell managed to cram onto the 0.79-inch thick frame.

The notebook comes with HDMI, power connector, Ethernet and two USB 3.0 ports on the rear. On the right side of the Latitude, you'll find a third USB 3.0 port, Mini DisplayPort, audio and SD memory card reader. The side ports make it convenient to connect headphones and a wired mouse or flash drive, while the rear situated ports make cable management easy when you're using the laptop on a desk. A VGA port isn't included, but you can regain the port if you need to connect the Latitude to an older projector with an optional Mini DisplayPort to VGA dongle.

On the bottom, the matte black powder-coated paint is simply wonderful. It conceals the metal so that it doesn't feel cold to touch when the device is powered off, and the paint adds a nice grippy feel so that the laptop doesn't feel slippery when you're carrying it around the office. Compared to the soft-touch coating that rival Lenovo uses on the ThinkPad W550s, the powder-coating gives the laptop a nice matte finish but without attracting oils, dust or fingerprints.

The Latitude 12 7000 is a highly serviceable laptop with a removable battery and removable back plate. To get to the internals of the laptop, you'll need to remove the battery, unscrew two screws and slide out the metal backplate. Once I did that, I was able to upgrade a few key components of the laptop, including adding a Dell Wireless 4G LTE WWAN module, another 8GB of RAM to the second memory slot and the 256GB solid state drive to a 1TB mSATA SSD.

Next Page Specifications, security and performance