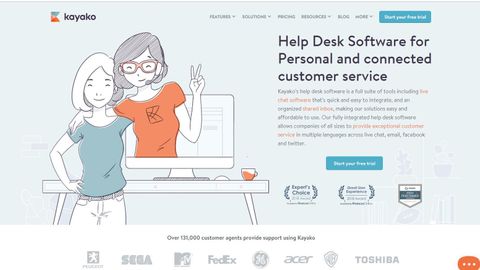 A customer-focused helpdesk solution that is designed to build a communications bridge between the customer and those supporting them. But being attentive doesn’t come cheaply for those that choose Kayako.

Originally founded in Jalandhar in India, its current headquarters are now in London with offices in Gurgaon, India and Singapore.

It appears lots of companies like the Kayako approach to providing support, but is it the right helpdesk solution for you?

In many respects, Kayako has similarities to many other web-based helpdesk platforms, where you can access them using a browser from almost any computing platform.

Alongside the web interface, Kayako also has mobile platform apps that allow the same customer supporting activity to take place on a phone or tablet when away from the office.

And, it also has a strong offering for those customers who don’t want to chat with helpdesk staff and would like to use a support portal to resolve issues through self-service.

This multi-pronged approach is designed to make the customer the priority, not the support staff. It’s objective is to provide a highly personalised and tailored solution where the customer doesn’t feel like a ticket number.

While everything is handled via tickets, this isn’t meant to be purely an automated response solution. It encourages agents to personalise responses and interact with the customer using a wide selection of contact channels.

To speed up response time macros can insert often used paragraphs into a conversation, and you can create extra ones to handle new situations as they arise.

Automation is one of the key features of Kayako, and in addition to macros, you can build a workflow model that drives customers through the system, keeps colleagues and managers in the loop, and binds in those support people who can best help.

While this level of functionality isn’t available on day one, Kayako was built to help generate the right business processes rapidly.

To help see where these enhancements would be best made, a drill-down reporting tool is included that presents all of the critical metrics. And, if these don’t provide all the answers, custom reports can be created with a little knowledge of SQL database language.

The web interface isn’t radically different from Freshdesk or other web-based support tools.

Where it diverges is in the importance that the customer conversation is given and all the tools provided to make that as slick as possible.

Therefore, once you’ve waded past the dashboard of support requests and picked (or been allocated) a person to help, you can initiate that conversation on whatever media platform the customer is on.

And, it isn’t an issue if the conversation started on Twitter, then moved to email, and then to Facebook, it’s all on the same conversation in a single place on the system.

And, also while the agent is having the support conversation, a complete profile of the customer is available to them. It details what solutions they’ve searched for, support articles they read, and other conversations they’ve had with the help team.

Because this knowledge is on hand, an agent can avoid asking them to try a solution that has already been explored, and progress them more quickly to a resolution.

If you are providing after-sales support, their entire purchase history can be made available through the numerous software integrations to the likes of Shopify, Trello and Salesforce.

But what if you don’t have the answer, what then?

Kayako has a referral system where you can bring other team members into play, add notes for them to read, and leverage the expertise of the top people when appropriate.

One feature in the conversation panel that impressed us was that it informs the agent when a customer receives a response email, and when it is read.

When a conversation is complete, the system automatically dispatches a satisfaction survey, potentially generating immediate feedback.

For those wanting mostly positive feedback, Kayako has SLA rules that can be applied to each customer, defining how quickly they should get a response and the timescale for resolution. And, managers are alerted if a conversation is about to cross these boundaries to avoid breaking the SLA rules.

Access to the agent area of Kayako can either be with the standard login that merely requires a password or via single sign-on solution.

The only other restriction on agent access is that it can be made mandatory that agents use a computer within a specific IP range.

These controls might well stop a disgruntled ex-employee from accessing the system outside work but will also have the downside that working from home or a mobile device won’t work unless those IPs are specifically sanctioned.

The pricing model for Kayako is very simple with just three plans; Inbox, Growth and Scale. Inbox has basic tools, Growth adds automation and Scale includes an advanced workflow mechanism. They are priced at $15, $30 and $60 per agent per month (billed annually).

There is no free option, but a trial is available for those that want to see what the software can do.

Unlike some competitor products, the lowest tier ‘Inbox’ can do plenty as it includes 600+ integrations with Zapier, can use all the different communication channels, includes assignment rules and has a basic help centre.

While the cost is still per agent, Growth also allows up to five support collaborators to work alongside the agent to help them, even if they can’t reply directly to the customer.

The top tier, ‘Scale’, has the feature set that enterprise customers are most likely to want, with advanced workflow customisation, an internal help facility for agents, custom security policies, custom roles, and Salesforce integration.

It also boosts the number of collaborators per agent to ten, allowing for a large backroom of support staff to contribute.

Although not a standard tier, Kayako also has a special Enterprise solution with even greater customisation in it than the three standard plans. That costs $100 per month for each agent using that premium facility.

The major complaint from users of Kayako in recent years is that the price has risen sharply for existing users. Previously they offered Kayako Fusion Helpdesk, a self-hosted solution that was a cheaper option, but that’s no longer available.

Overall, despite a few wrinkles, Kayako is a slick and elegant solution that is designed to grow from a basic ticket tracking solution into something more sophisticated with use.

It’s very similar in many respects to Freshdesk, is cheaper than that product and includes more features for your money.

However, should it keep on getting successively more expensive, customers are likely to look elsewhere.