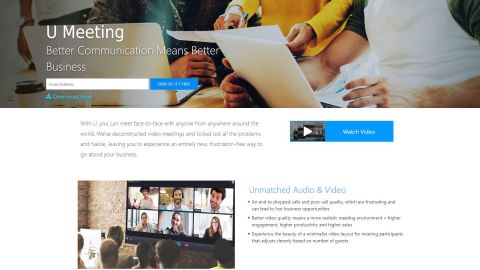 One of the few examples of video conferencing software whose value gets worse as you add more participants, CyberLink U Meeting is best for smaller businesses looking to take advantage of the free Basic plan or the cost-effective Pro 50 subscription package. As much as we appreciate U Meeting for its accessibility, its higher tier plans abandon some key features found in Cisco WebEx.

Of all the things that came with the ushering in of the internet, video calling was one of the biggest savers of time and money we can think of.

Where it used to be that we would have to plan trips and use up our vacation time to visit distant relatives, it’s now possible to have face-to-face conversations without the hassle of physical relocation. It’s also viable for businesses to leverage the same video chat technology that was popularized by Skype and iChat to host large conferences and seminars virtually with the aid of a few camera-equipped computers and cell phones.

While there are a number of video conferencing software options to choose from, Taiwanese multimedia software company CyberLink hopes to be the one that your business adopts. Perhaps known best by consumers for its DVD playback and burning software PowerDVD, CyberLink plays a role in the video conferencing space as well, with a modestly priced application the firm calls U Meeting.

Competing with the likes of video conferencing juggernauts like RingCentral Meetings and Zoom, CyberLink U Meeting is admittedly more comparable to Cisco WebEx due to being entirely browser-based rather than requiring a download.

For that reason, some folks will be deterred by CyberLink U Meeting altogether, and that is completely understandable. Not every company wants their employees locked to a web browser when they conduct meetings. Other businesses prefer it, as it cuts out the middleman of having to deploy a desktop application on each participant’s work computers. U Meeting is a basic video conferencing service whose feature set sits somewhere below LogMeIn’s rather limited join.me Pro plan.

Still, for companies seeking an easy-to-use service with all of the essentials on board, CyberLink U Meeting presents a compelling value and a handful of unique components if nothing else.

As is the case with most of its competitors, CyberLink U Meeting comes in four different subscription packages, one of which is a free version that basically serves as a sampler. With U Meeting, that’s called the Basic plan, and we were surprised to find out that its only limitations are its 25-participant limit and its maximum run time of 50 minutes per meeting.

Aside from that, U Meeting includes many of the features from U Meeting Pro 50 and Pro 100, with the exception of admin tools and virtual makeup plugin PerfectCam, which we’ll touch on in a moment.

The U Meeting Pro 50 plan, as its name suggests, allows for up to 50 participants per meeting, the same capacity as WebEx’s Starter plan. The time limit is upped to 24 hours per meeting.

Furthermore, in U Meeting Pro 50, administrators get access to a set of their own tools, letting them keep tabs on how many U Meeting accounts have been purchased and how much time each person has left on their account.

PerfectCam, meanwhile, is the most bizarre feature we’ve encountered in any video conferencing software up to this point. Described by CyberLink as a “virtual makeup plugin,” it promises to “create an impressive professional look” by adding computer-generated makeup to your face, reminding us that we truly do live in the most superficial timeline.

Similar to trendy photo app YouCam Makeup-Magic Selfie Cam for iOS, the end result is realistic enough where most people won’t notice you’re not actually wearing makeup. So if you want to look good for your meeting without putting in the time, PerfectCam is – at the very least – an imperfect solution for just that.

From there you can upgrade to the $19.99 (£15.40)-per-month CyberLink U Meeting Pro 100 plan. Ramping up the maximum participant count to 100, this service otherwise supports all the same features as U Meeting Pro 50. It costs more than Cisco’s $17.95 (£13.83) WebEx Plus plan despite offering fewer features. Cloud recording and VoIP dial-in are notably absent from CyberLink U Meeting.

What isn’t absent are collaboration features such as real-time live note taking and messaging, participant muting and screen/application sharing. Outlook and Google Calendar integrations are available with CyberLink U Meeting at every level.

The last U Meeting pricing plan is the Enterprise tier. Toting everything from the Pro 100 plan, like the 100-participant limit and 24-hour meeting limit, CyberLink U Meeting Enterprise tacks on reporting, “premium” customer support and end-to-end encryption. Unfortunately, the price of the Enterprise plan is unclear since the CyberLink website suggests you have to contact sales in order to find out how much it costs.

Robbed of its potential glory by the aforementioned Cisco WebEx Plus, CyberLink U Meeting is another example of video conferencing software that doesn’t demand any cumbersome downloads or installs. Instead, all of its features can be experienced in a browser like Google Chrome or Safari. Although it disappointingly omits some of the more interesting aspects of its closest rival, such as cloud recording and the ability to dial into meetings using a VoIP system, CyberLink U Meeting’s low starting price makes it a tempting proposition nonetheless.