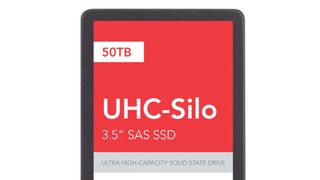 There’s been another huge SSD unleashed onto the world, and while it’s not quite as big as Seagate’s monster 60TB solid-state drive which was revealed last summer, this effort from Viking comes close at a whopping 50TB – and it’s shipping now (whereas Seagate’s offering isn’t yet).

Viking’s new UHC-Silo SSD is a 3.5-inch drive with a SAS interface (Serial Attached SCSI), as is the case with the Seagate SSD, and equally it will also be aimed at data centre and enterprise usage – with an exorbitant price tag.

That said, pricing hasn’t yet been revealed, despite the fact that the company insists that these drives are available to ship from today, as mentioned.

While these sort of mammoth SSDs aren’t remotely within the reach of consumers at this point, development of these large-capacity drives has a trickle-down effect, and gives us a flavor of what we can expect in the way of bigger mainstream offerings for the future.

Viking (which is a division of Sanmina Corporation) also has a 25TB model on offer, and these Silo SSDs are built with power-efficiency firmly in mind. They have an idle power consumption level of less than 10W, and active power consumption of 16W.

Viking claims: “Data centres looking to transition to a plug-and-play UHC-Silo SSD can realise cost savings in power, space, and cooling of up to 80% per terabyte.”

Looking further down the line, Samsung claims that it will have a 100TB SSD available by 2020.