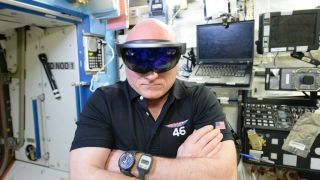 The HoloLens is arguably one of the coolest augmented reality headsets around, however, the integral Holographic Processing Unit (HPU) that actually powers it has been shrouded in mystery – that is until now.

The Register reports a Microsoft devices engineer named Nick Barber ran a presentation detailing exactly what makes the HPU tick. It turns out the chip is none other than a TSMC – who also manufactures iPhone-processors – made 28nm Tensilica chip containing 24 DSP cores, 8MB of static RAM, 1GB of DDR3 RAM all packed into a 12mm-squared package.

Now those specs might not sound super impressive, but the HPU has around 65 million logic gates and can handle roughly a trillion calculations per second. Although, the HoloLens also has a separate CPU and GPU they're really only around to launch apps and display holograms. Meanwhile, the 24-core chip handles the bulk of processing tasks including real-time information feeding in from the cameras and sensors.

Barber also highlighted the HPU is fairly economical and draws less than 10-watts of power to track gestures and scan the user's environment. Additionally, the HPU also supports PCIe and serial interfaces potentially making it expandable.