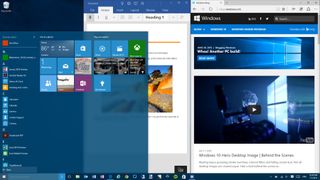 There has been a lot of confusion over a statement issued by Microsoft earlier this year saying that Windows 10 would be free for the "supported lifetime of the device".

If your device can last more than 10 years then that's all good because according to an updated support document from Microsoft, it will offer mainstream support for its forthcoming OS until October 13, 2020.

Extended support will go on till October 14, 2025. The difference between the two types of support is that new features won't be added past 2020 with security fixes being issued till 2025.

The right move by Microsoft

That seemingly applies to all versions of Windows 10 including the free (obtained via an update to Windows 8.1 or Windows 7) and the paid-for one as well as Windows 10 Mobile.

The details come just days after a presentation suggested that devices would get free upgrades for the first two-to-four years of each device's lifespan which caused further confusion.

The next in line to get its mainstream support ended is Windows 8 (January 2018) while the next one to see its extended support severed is Windows Vista (April 2017).

Over the next 10 years, Windows 10 is likely to evolve into a hybrid beast that combines as software-as-a-service component, just like Office 365 and a permanent application, like Office 2016.