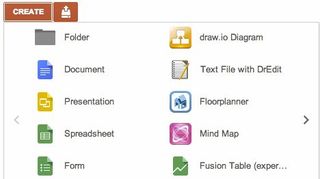 The Drive just got better

Google Drive launched last year, and it's had no trouble making headway against competitors like SkyDrive, Dropbox and iCloud.

And though third-party apps that interact with Google Drive have long been buried, Google announced Friday that changes have been made to remedy that.

Google added space to the "create" menu for third-party apps to sit alongside Google apps like Docs and Sheets, plus a "Connect to Drive" app browser to search for Drive-enabled web apps without having to leave Drive at all.

"This makes your Drive-connected apps easier to reach and more visible to Google Drive users," Garnier wrote, addressing developers of apps that use Google Drive.

Within the create menu, clicking "connect more apps" allows you to browse Google Drive-connected apps from directly within Drive, negating the need to visit the Chrome Web Store.

Google app developers whose apps are already compatible with Drive and listed in the Chrome Web Store's Drive section don't have to do anything extra for their apps to be integrated thus - Google is doing it automatically.

Garnier recommended Google app developers who aren't yet integrating with Drive check out these steps to learn how to do so.