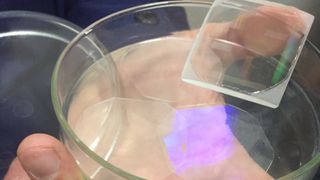 A major Russian tech firm has announced the discovery of a new plant-based storage medium which it claims is set to make Blu-ray (and indeed other optical discs) irrelevant.

Rostec notes that its new technology utilises principles of photonics to record and store data on a film-like medium. Check out the image above – the piece of glass contains multiple layers of this photosensitive film (you can see three pieces of the film in the dish below).

The layers comprise of a substance known as chromones (formed in plants), and the resulting storage device beats out Blu-ray in terms of not just capacity but also on the performance front.

Rostec is saying that the potential capacity we’re talking about here is up to 1TB – 10GB of data can be stored in a single functional layer – with transfer rates of up to 12Gbps being claimed at this point.

At the moment, this is still very much in the early stages of development, with the initial sample having been created, and the tech to be licensed in due course. So there’s no news on pricing yet, although the company is saying that the new media will be cost-effective.

As well as the field of storage, Rostec has its hand in many technological pies including telecoms, optics, security systems, robotics and more.

So while details are relatively thin on the ground at the moment, this is a development which is clearly worth keeping an eye on.