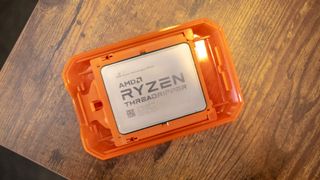 AMD chief executive Lisa Su took to the stage at the Hot Chips conference at Standford University, where she promised that we’d get more information about the third generation of Threadripper processors “soon”, and later clarifying that we’d hear more about them at some point in 2019.

This is welcome news, as we’re big fans of previous AMD Threadripper processors, like the AMD Ryzen Threadripper 2970WX, which offer huge core counts, brilliant performance and very competitive prices, however, AMD has been worryingly quiet about the future of Threadripper.

There was no sign of it at AMD’s Computex 2019 show, and with AMD’s new Ryzen 3000 series of processors featuring a lot of what made Threadripper unique, there was concern that AMD might be quietly dropping the processors. Thankfully, that doesn’t seem to be the case.

Caught in the CrossFire

While Su was keen to assuage fears over Threadripper’s future, she was less positive about the fate of CrossFire, which was AMD’s technology for allowing users to run multiple graphics cards at once.

“To be honest, the software is going faster than the hardware, I would say that Crossfire isn't a significant focus,” she said when asked about the technology. For the moment, at least, that means you won’t be able to run more than one AMD graphics card in a PC at the same time.

The future of CPU design

Su’s keynote speech also touched on how AMD is working on improving CPU performance – with a particular focus on server processors.

While previously, improvements to CPU performance had focussed on improving the microarchitecture, increasing silicon power and boosting power efficiency – as well as by creating denser and more powerful transistors, according to Su that is now changing.

Instead, AMD and other chip makers need to focus on software efficiency and optimisation, memory bandwidth and looking at how CPUs and GPUs can better share the workloads.

Anandtech has a good liveblog from the event with more details, and from the sounds of things, AMD is working hard to keep its current hot streak going – even if that means jettisoning outdated and under-performing products and features, no matter how popular they are among enthusiasts.