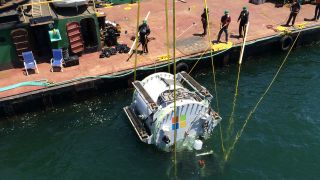 Microsoft has plunged an enormous data center into the sea off the coast of Scotland's Orkney Islands. This is the latest phase of Project Natick: an experiment to see if data processing can be greener and more affordable – huge concerns in the age of cloud computing.

Natick's first stage involved submerging a prototype a kilometer off the Pacific coast of the US, proving that it could work below the surface and be cooled naturally by seawater. It operated underwater for 105 days.

With its experiment at Orkney, Microsoft wants to prove that full-scale underwater modules can be built economically and deployed within three months.

“The most joyful moment of the day was when the datacenter finally slipped beneath the surface on its slow, carefully scripted journey,” said project manager Ben Cutler, who helped supervise the deployment at Orkney.

Natick is purely a research project at the moment, but Microsoft hopes the lessons it learns could lead to real life benefits for internet users – particularly faster speeds.

"Half the world's population lives within 200km of the ocean," Microsoft says. "If the ocean so placing datacenters offshore increases the proximity of the datacenter to the population, dramatically reducing latency and providing better responsiveness."

The new data center will use 100% renewable energy from on-shore wind turbines and solar panels, plus off-shore tidal and wave turbines. In the future, Microsoft envisions that underwater units could eventually be made entirely from recycled materials.

Microsoft has yet to announce phase three of the project, but the latest unit is scheduled to work beneath the waves for up to five years. The company hopes that eventually the data centers will reliable enough operate for up to 10 years with nobody on site – instead using AI to detect any signs of failure.