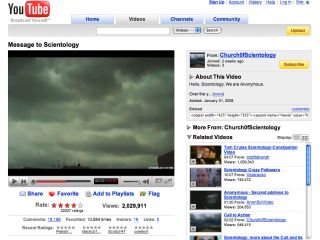 A person claiming to represent the anti-Scientology group 'Anonymous' has denied to TechRadar that it will attack Church of Scientology websites on Sunday February 10th.

"The 10th of February is to be a day of global, peaceful protests IRL (In Real Life), not further attacks on CoS websites. Anonymous opposes illegal activity; anyone claiming otherwise is either misinformed or seeking to cause trouble."

Anonymous argues that it is not against the beliefs of Scientology or its users, but by the practices of the Church itself. It points us to the Enturbulation.org site, part of which reads:

"The Church of Scientology has a psychopathic disregard for the life and wellbeing of others. Under this light it becomes clear that not opposing it would not be simply cowardly or uncompromised. It would be immoral."

However, Anonymous has posted an aggressive YouTube video where it lays out its opposition to the Church of Scientology in rather more forceful terms. It ends with the message: