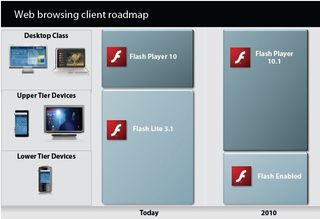 The latest GPUs from both AMD and Nvidia could soon be making your internet browsing quicker, with both companies confirming that their wares will accelerate Flash video.

Using graphic processors for more than just playing games is becoming increasingly important and processing Flash video faster is one of the obvious ways in which users can be given noticeable boosts.

Adobe announced Flash Player 10.1 at its annual conference, which prompted Nvidia to state its GPUs would accelerate the latest software.

And AMD confirmed that its ATI cards would also accelerate Flash Player 10.1.

"AMD is committed to making the video usage scenario - playback, editing and transcoding - a focal point for AMD platform innovation, smartly using the full CPU + GPU assets of our platform to enrich and accelerate the experience," an AMD rep told Tom's Hardware.

Flash is used extensively across the internet, and the prospect of quicker load times will appeal to consumers.

10.1 arrives in the first half of 2010 and even without GPU support is promising to be be significantly quicker than its predecessor.