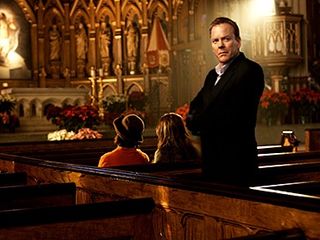 The hitman and Hurt

Fresh from battling the world's terrorists without once needing to go to the toilet in 24, Kiefer Sutherland has announced that he has signed up to a new internet-only web series called The Confession.

The series is a bite-sized look at the relationship between a hitman and a priest and will also star John Hurt.

Although the 10 episodes are a mere seven minutes long – which is actually enough time to disarm a nuke, introduce a new shady character and say 'dammit' 12 times in 24 – its makers believe it will rival anything that has been made by the big, bad studios.

Chris Young, head of the Digital Broadcasting Group, who created the series, said: "The Confession sets a precedent for what is possible in original webisodic content. Never before has something of this magnitude and motion picture quality come to the third screen.

"I'm thrilled to be working with such A-list talent and top-tier sponsors to finally capture and crystallise the seismic shift in how content of this caliber is released, distributed and enjoyed by an audience that will rival that of a hit television series."

There's no word of a UK release for The Confession but it will be debuting Stateside on Hulu in March.