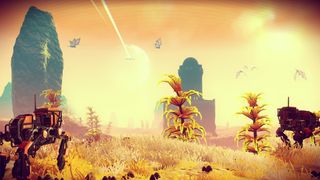 The ongoing question of whether No Man's Sky is actually an online game has seen a surprising development with the apparent removal of an online play logo from its box.

The news follows the apparent discovery that players arriving at the same planet would not actually be able to meet.

Prior to the its release the game's creator, Sean Murray, implied that players would be able to meet, although this would be so unlikely that the game should be considered a single-player experience.

You are not required to have a PlayStation Plus subscription to play No Man's Sky, which further suggests that it is a single-player only experience.

Now these changes to the game's box, which appear to only be affecting European limited edition boxes, suggest that multiplayer interaction in the game is not just very unlikely, but is actually impossible.

When asked for comment, a representative from Sony said, "Incorrect descriptors were incorporated into the original No Man's Sky limited edition packaging. This was a production issue and was rectified using placement stickers."