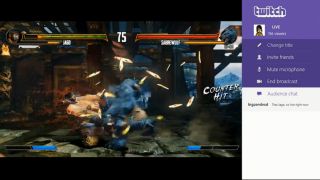 Twitch on Xbox One just got better

For some users Twitch's deep-rooted Xbox One integration is a major selling point for Microsoft's current game console, and that integration just got better.

A new update to Twitch on Xbox One adds a number of improvements, chief among them advanced filters that let you find what you want.

Users can now filter live streams with criteria ranging from specific player stats like kill/death ratios in Call of Duty to what maps are being played or what car streamers are driving.

Microsoft said in an Xbox Wire post that that means viewers can be more specific about what kind of broadcasts they want to watch, and broadcasters can more easily find the audience that wants to see their content.

Other changes include the addition of archived video on demand videos to Xbox One, revamped broadcaster profiles, improved search that lets you find specific people, manual stream quality select, and the ability follow whole games as well as specific channels.

The Twitch Xbox One update launched today and is available to all for free.