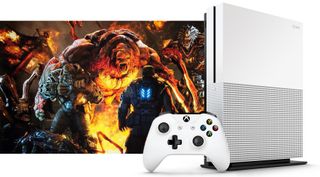 Pictures of Microsoft's rumored 'Slim' version of its Xbox One console have leaked ahead of the company's press conference on Tuesday, confirming its existence for the first time. Its official name will be the 'Xbox One S'.

We first reported on the existence of this console a couple of weeks ago, but this is the first time we've had the chance to actually see the console.

According to the leaked screenshots, which appeared on NeoGaf, the console is 40% smaller and features a 2TB hard drive.

Also interesting is the fact that this new console will support 4K video, as well as being high-dynamic range (HDR) compatible. It will also feature a vertical stand.