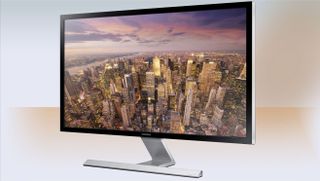 It was initially unveiled at CES earlier this year, and now you will be able to buy the Samsung's UD590 4K monitor from today for less than $800.

It is Samsung's first UHD monitor to land in Austrlaia, but like all other sub-$800 4K monitors on the market, this one comes with a TN panel, which can display more than one billion colours.

As expected, the refresh rate for Displayport hits 60Hz, while HDMI stalls at 30Hz. For connectivity it does have two HDMI ports and one DisplayPort port.

There's also a useful picture-in-picture feature that allows two computers to connect to the UD590 simultaneously; each getting half of the native resolution (i.e. 1920 x 2160 pixels).