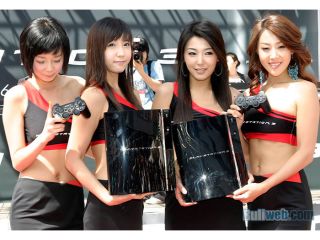 Korea is now the only country with an 80GB PS3 to call its own.

South Korean gaming websites are currently exalting in the fact that - as of Saturday - their country is the only one in which an 80GB version of Sony's PlayStation 3 is available.

A launch event held in Seoul featured a four-hour countdown and was attended by a small crowd of mostly photographers and hardcore game fans. The 518,000 won (£290) price for the console with 20GB more than in the rest of the world compares favourably with the £425 Sony charges for the 60GB version in the UK.

Despite speculation to the contrary, Sony claims it will not launch the more-capacious PS3 anywhere outside Korea. It claims the almost-total penetration of broadband internet connections there means Koreans alone have a need for a larger hard drive.

That patently nonsensical argument - it doesn't account for Japan or the fact that a faster connection doesn't necessarily imply more downloads - means that we reckon you'll still be seeing the 80-gigger sometime late this year in your local shops.

For a look at photos of the event, feel free to check out the excellent Korean-language site Ruliweb , which supplied the photo you see above.