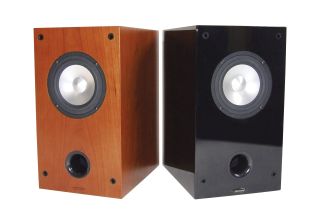 Small wonder: Aurousal’s ‘Best Buy’ A1 speaker gets a nip and tuck

Milton Keynes based speaker company Aurousal Ltd has already launched an upgraded version of its well-received standmount A1 loudspeaker. Despite being a newcomer to the market, the company has quickly implemented changes to a speaker already well regarded in the press.

In fact, the UK’s leading hi-fi magazine, Hi-Fi Choice, awarded the £450 speaker a Best Buy badge in a six-way ‘Ultimate Grouptest’ – quite an achievement for a new product.

The A1 is one of only a handful of speakers on the market to use a single driver approach – a method that the makers claim, “delivers far superior sound quality to traditional methods”. By using a full-range driver the company can fully exploit the simplicity of the single driver method – the speaker has a single terminal pair, no crossover and just a simple reflex-ported enclosure.

Aurousal’s changes are said to increase the bass performance across the entire bass bandwidth. The company says the Mk2 version has “as near perfect response balance as possible” regardless of whether the speakers are used in larger rooms, near the wall or offset by some distance.