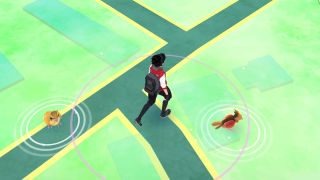 Pokémon Go has taken the world by storm and all you need to play it is a smartphone and a willingness to get outside, but just what is it? And why should you care?

If you don't know a Bulbasaur from a Butterfree this is the guide for you, covering the basics of Pokémon and the key things you need to know about Pokémon Go.

Unless you've spent the last 20 years under a rock, in a cave, or at the bottom of the sea, you've probably come across Pokémon before now, but it can seem odd and even impenetrable if you've never played one of the games.

The series spans video games, TV shows, films, a trading card game and more, but at its core it's about exploring a world and collecting wild animals known as Pokémon.

Players capture them by using their own team of Pokémon to battle them, then, once weakened, throwing a 'Poké Ball' which they become trapped inside. But unlike the real world, where you'd end up with an angry, terrified creature, capturing a Pokémon bonds it to you.

Over the years more and more Pokémon have been added, with the number now totalling 751 and these range from critters that are much like real world creatures, such as Pidgey, which is essentially a vicious pigeon, to complete fantasy, like Mewtwo, which is a psychic creature that resembles an alien.

As well as collecting new Pokémon you must also train and level up your existing ones, to make them stronger and unlock new abilities for them. This is also usually done through battles, giving the games an RPG edge.

What is Pokémon Go?

Pokémon Go takes the Pokémon concept out into the real world. Players are still Pokémon trainers, but rather than exploring a virtual world you have to physically walk around.

Pokémon Go shows you a map of the real world with your location on it and as you wander you'll come across Pokémon, which you can then capture by throwing a Poké Ball.

Aside from having to go outside to play it properly there are a few other differences between Pokémon Go and other Pokémon games.

For one thing it's free and available for iOS and Android phones. This is in part why it's proving so popular, as previous Pokémon games have been exclusive to Nintendo hardware and usually cost money, putting up a significant barrier to entry.

The other obvious difference is that Pokémon Go is an augmented reality game, as when you find a Pokémon you view it through your phone's camera overlaid on the real world.

Like many other Pokémon games, you get to choose your first Pokémon in Pokémon Go, however you're limited to three options. There's Squirtle, a water-type Pokémon that resembles a turtle, Charmander, which looks a bit like a dinosaur crossed with a dragon, and Bulbasaur, which is basically a plant with legs.

There's no right or wrong answer when choosing, as they all have the same amount of potential, so you're safe to go with whichever one you like the look of most.

As well as all looking different, Pokémon each have different strengths and weaknesses, dictated mainly by what 'type' they are. There are a wide range of types, including normal, fighting, flying, poison, ground, rock, bug, ghost, steel, fire, water, grass, electric, psychic, ice, dragon, dark and fairy.

Each of these is particularly strong or weak against specific other types, a bit like a really convoluted game of rock paper scissors. Memorizing all the strengths and weaknesses can be a headache, but some are quite obvious, for example water types do a lot of damage to fire types, while fire is effective against grass.

Pokémon Go will tell you if you're using a type that's ineffective against whatever you're battling too, so it's something you'll learn over time.

You can also evolve your critters using candy, which turns them into a different, stronger Pokémon. Most can evolve at least once, but some have multiple evolutions. Charmander for example first evolves into Charmeleon, which looks like a bigger, angrier version of its initial form, and then into Charizard, which is a winged, dragon-like creature.

The main joy of Pokémon Go is finding new and exotic creatures to add to your collection and to have the best chance at this you'll want to head beyond your back garden, as different Pokémon are found in different places and their locations often relate to their types. For example, you're likely to find water type Pokémon near rivers and oceans.

To have an effective team you'll want at least a few different powerful Pokémon of different types, so don't just focus on strengthening one. Taking down the toughest gyms will require a varied line-up.

Battles play a smaller role in Pokémon Go than the main series of games, as you don't need to battle Pokémon to catch them, instead you just throw a Poké Ball as soon as you spot them.

But there are still gym battles and in these you'll fight against other player's creatures, so expect a challenge.

Fights play out a bit differently too, as where in most Pokémon games they're a turn-based affair, here Pokémon attack in real time. Tap on an enemy to use your basic attack or tap and hold to use a more powerful one and swipe left or right to avoid being hit.

In most Pokémon games gyms house tough trainers, which are a bit like bosses. In Pokémon Go they're defended by other player's Pokémon.

These are in real world locations, often around landmarks and points of interest, but they're easy to find as they're the largest icons on the in-game map.

They're controlled by one of three different teams- red, blue or yellow. Once your trainer reaches level 5 (a process which happens through collecting Pokémon and doing other activities in the game) they can pick a team to join and fight for that team to claim gyms.

Winning fights at gyms gets you experience points to help you level up further and if you take control of an enemy gym you can leave one of your Pokémon there to help defend it. This is worth doing as for every 21 hours that you have a Pokémon there you'll get Pokécoins to spend at the in-game shop, and stardust to power up your creatures.

You can also fight Pokémon at gyms owned by your team, and this is considered training and both helps you and the gym, as friendly battles add to its 'prestige', eventually allowing additional Pokémon to be housed there to help defend it.

There's no end game to Pokémon Go, for now all you can really do is collect more Pokémon and take control of local gyms, but the game is likely to develop over time. With so many players already Niantic would be crazy not to capitalize on it and add more content.

Even with what's here now this could easily be your next addiction, so make sure to check out our battery saving guide too, so your phone doesn't die just as you're catching a Gyarados.