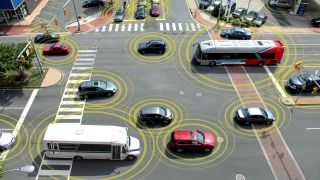 There’s no doubt that connected vehicles are the way of the future, as any number of initiatives from all corners of the tech spectrum illustrate.

The 5G Automotive Association (5GAA) for example, is a collaboration of vehicle manufacturers, tech companies and the telecoms industry that wants to come up with a more universal solution for our future mobility and transportation needs. Being connected is central to that.

However, this is a complicated and not easily solved issue. Standardising how vehicles, and indeed everything else from your household’s white goods to pets, prams and coffee percolators connect, is still far from clear. Whatever connectivity method is used, joining up the dots between vehicles, devices and people is certainly the way forward, particularly in urban areas where city populations are on the increase.

One example in the USA aims to tackle the urban issue head-on. The Tampa Hillsborough Expressway Authority (THEA) connected vehicle pilot is a great new initiative designed with making streets in the Florida city safer and much more efficient.

To do this, the city has been working with Siemens to develop a network of wireless boxes or Vehicle to Everything (V2X) roadside units (RSUs) that effectively join up those dots between vehicles.

This network of 46 roadside boxes is so far linked to around 1,000 car-owning volunteers along with 10 buses and ight streetcars. It’s just one of a handful of pioneering projects in the US, including one in Wyoming and another in New York City, aimed at streamlining traffic flow and cutting down on accidents. To do this THEA is utilising vehicle-to-vehicle (V2V) and vehicle-to-infrastructure (V2I) communication technology to make it all work.

The local authority signed an agreement with the US Department of Transport (USDOT) back in 2015 and the Tampa/Hillsborough Regional Expressway Authority (THEA) has been working alongside the Hillsborough Regional Transit Authority to implement the concept. They already had a solid foundation, after realising the benefits of all-electric tolling systems. The Connected Vehicle or CV project seemed like an obvious extension of that.

For the Tampa project, CVs communicate using a two-way short-to-medium-range wireless tech called DSRC or Dedicated Short Range Communications, which is a bit like Wi-Fi. This doesn’t mean the car, bus or whatever it might be is automated or autonomous as the driver has full control at all times. However, it does mean the driver can receive a series of dynamic warnings on the go, including audio and visual indications for end of ramp deceleration and forward collision alerts, amongst others.

We recently got to see the pilot in action and it boasts a number of potential solutions, all of which are tied into the connected vehicle concept. City officials even closed off a portion of the Lee Roy Selmon Expressway for us in order to illustrate the various facets of the project. There was even a police escort at the entry to the highway, just to deter anyone tempted to drive on to the otherwise deserted city overpass.

Sitting in the back of a typically cavernous Chevrolet the team explained to us how the system had been designed with a number of objectives in mind.

Central to this is that series of driver alerts, which appear in the driver’s rear view mirror as and when they get triggered. The first example to appear was after we’d driven up the highway and then back down the hill towards a sharp bend in the road. The team explained how the specially adapted rear view mirrors were able to flag up numerous warnings in their CVs.

Officials explained that this sharp curve, which ends at the traffic light-laden intersection of East Twiggs Street and Meridian Avenue, is prone to traffic congestion that builds up around the bend.

To combat crashes the alert system automatically flashes up a warning to tell you if traffic is queuing and also to slow down for the curve. The best thing about this is the way the warning appears in the rear view mirror, so it’s pretty hard to miss or ignore.

Similarly, going the wrong way on roads is surprisingly more common than you might think, especially in America it seems. This issue is potentially compounded in Tampa where the city has employed a reversible lanes initiative (REL). Again, this is being employed in the Lee Roy Selmon Expressway and it’s designed to make optimum use of traffic management. Lanes are switched around during different times of the day in order to increase traffic flow during rush hour commutes.

This is a very practical solution but not without its issues. The THEA connected vehicle pilot is perfect for addressing the problems of confused drivers going the wrong way. Using the connectivity of the vehicles and the roadside boxes drivers are warned of wrong-way drivers well in advance. City officials explained that this could be the way to stop accidents, with this stretch of road being the perfect test bed following a number of fatalities over the years.

Another bonus of the system is when you come off the expressway and into town. City streets are full of people and not all of them are as conscientious at looking out where they're going as you are. As a result, the connected system adds another level of safety by issuing pedestrian warnings as you drive through the intersection and onto the urban roads.

However, the system is also useful for making traffic flow more efficient. Case in point is the TECO Line Streetcar System. This is an electric trolley service that runs between downtown Tampa and Ybor City. Safety has been improved in this example too, as the connected vehicle system flashes up alerts when lazy or distracted drivers decide to turn across the urban rail tracks in front of a tram.

Better still, particularly considering just how long the lights take to change at American intersections, is the way the system can optimise signal timings. Having vehicles connected can also let drivers know when there are obstacles in the vicinity that they may not have otherwise seen. This is particularly useful at blind junctions and suchlike, where you might have no clue as to what’s around the bend.

And, with those roadside boxes working the lights more efficiently, you're not stuck at an intersection for three minutes when there’s nothing going the other way. All of which means you’ll get to your destination faster and, hopefully, in one connected piece too.