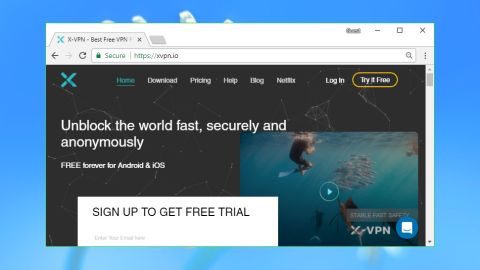 It's easy to use with a free plan, but we wouldn't trust X-VPN with anything confidential.

X-VPN is a popular free VPN with 'free forever' iOS and Android plans and clients for Windows, Mac and Linux.

Finding out about X-VPN is more difficult than it should be, thanks to a website which is a confusing mix of generic claims about VPNs and unexplained features of its own service.

X-VPN tells us about 1,546 servers, for instance, but doesn't mention any countries. And there's an intriguing line about the service offering '7 protocols' - even the best providers usually stop at five - but, oops, the company doesn't tell us what they are, either.

Elsewhere, the website does mention some appealing features. Mobile users can access the (ad-sponsored) free servers forever, without registration; your privacy is protected by a 'strict no-logging policy' and the company claims to offer '24/7 world class chat support', although this isn't quite what it seems (the chat window says replies may take hours, asks you to enter an email address for updates, and even days later you may hear nothing).

An ad-free commercial plan gives you unlimited bandwidth and access to premium servers. It's priced at $11.99 (£8.57) a month on a monthly billing cycle, $5.99 (£4.28) if you pay for a year up-front. That's decent value, especially as you can use X-VPN on as many devices as you need, and if you're disappointed there's a 7-day money-back guarantee on hand.

As we write, a dedicated X-VPN Netflix account enables unblocking Netflix and Hulu for $1.99 (£1.42) a month or $19.98 (£14.27) a year. If you only use a VPN for streaming, that looks cheap, but keep in mind that Netflix works hard to block VPNs and there's no guarantee X-VPN will work for a full year.

X-VPN's 'no-logging' policy sounded impressive, but in our experience the reality doesn't always match up to the headline. We decided to dig into the small print to find out more.

The Privacy Policy provides very little detail, and we suspect the author doesn't speak English as a first language ('we are aimed to protect your privacy'.) That's not a big deal on a general page about VPN benefits, but official policy and contract documents have to be clear and unambiguous.

The page does its best, anyway, explaining that it doesn't log your browsing history, traffic data or DNS queries. But it defines 'traffic data' as 'the destination of your online traces or conditions', and we habe no idea what that might mean.

The policy states that X-VPN logs the date (but not the time) when you connect to the service, the package you've purchased and any connection errors. Apparently it also logs your 'data condition'. Is that good, or bad? We've no idea.

Confusing, a separate Help document says the service does log the date and time of connects and disconnects, though not the IP address.

The Terms of Service linked from the website is a little clearer, explaining that 'X-VPN does not and will not collect or store traffic data, DNS queries, browsing history and VPN connection destination.' Information is only shared when 'ordered by a court of competent jurisdiction'. That sounds encouraging, although on closer inspection we realised most of the document appeared to be cut and pasted from other VPN terms, suggesting it may not reflect what X-VPN is really doing.

To understand why this might matter, here's a section from a separate terms of service page linked from the Android app:

"By using X-VPN you acknowledge and consent that X-VPN may display advertisement within the App,as a separate webpage in your browser,or in any manner that we find suitable.We may use third party advertisement services with their own terms and conditions.By using X-VPN you also agree the terms and conditions of those third party services... Using any tools including any software or scripts that may prevent X-VPN from displaying advertisements may be considered violation of this agreement and we may terminate your account."

In other words, even if we did fully understand X-VPN's small print, it's not the whole story, because just using the free app means signing up to the policies of its various ad providers.

As a final privacy check, we took a look at the permissions of X-VPN's Android app. These went a little further than strictly necessary, with X-VPN asking for access to 'Photos / Media / Files' and 'Storage'. This doesn't necessarily mean the app is doing anything dubious, though, and we've seen other free VPNs ask for much more.

We started our real-world tests by installing the X-VPN Android app, which set itself up with no hassles or complications at all.

The app has a good-looking interface with an unusual task-oriented design. Instead of simply displaying a list of servers and allowing you to decide what happens next, X-VPN also offers options to stream content, unblock sites, reduce monitoring or change your IP and virtual location. Choose one of these and the app tries to point you in the right direction.

Tap Stream Content, for instance, and X-VPN displays buttons to watch Netflix, BBC iPlayer, Hulu, Sky Go, Pandora, Amazon Prime and Australia's 9Now. The commercial services aren't available with the free app version, but when we chose BBC iPlayer, the app connected to a UK server and we were able to stream iPlayer content.

It's not quite as clear what the other connection options are doing. How does the 'Hide and Change IP and virtual location' option differ from 'Stop being monitored online', for instance? Both come as a consequence of using a VPN.

There was even more vagueness in the Protocol panel. X-VPN did allow us to choose between seven options, but bizarrely stated that to protect our privacy, it would describe these as protocol A, B, C and so on, rather than using their real names. This doesn't protect your privacy, it hurts it, because there's a chance you might choose an insecure protocol such as PPTP without realising.

The puzzle continued, as our APK inspection and Android testing showed no sign of support for anything other than a standard Android connection. We couldn't see any OpenVPN libraries or references, for instance, and however we connected, our device Settings always showed us as using a regular Android VPN connection.

Whatever the server, Android performance was reasonable with the commercial version peaking at around 20Mbps on a wifi connection (non-VPN speeds were around 30Mbps). Free speeds were significantly lower at around 6Mbps in the UK and 2Mbps for US-UK connections.

Next up, we installed X-VPN's Windows client to get a feel for how the service performed on the desktop.

Oddly, despite the talk about the app being ad-sponsored, X-VPN didn't display any of the usual pop-up ads during our review. Maybe they kick in later, or perhaps the service is inserting ads in other ways - we don't know. But initially, it least, it seemed to be ad-free.

The Windows app has a more basic and clumsy interface than its Android cousin. There are no task-based 'Stream Content'-type buttons, and we were able to do little more than choose locations from a list and connect or disconnect.

The client didn't display any desktop notifications as we connected, instead popping up an alert over its own display. This doesn't make much sense in usability terms, as it means you have to click the close button on the Connected alert before you can disconnect.

The Windows free plan is a little different to the mobile version. This time we had 500MB of free traffic on the premium servers, but after that we were only able to use servers in Germany, the US and Singapore. Free servers are also limited to 1GB of data transfer per session, perhaps an issue if you're hoping to stream HD content.

The Windows client also claimed to support seven protocols, but again, we couldn't see any sign of this. Other Windows VPN clients almost always bundle the open-source OpenVPN.exe to handle OpenVPN connections, for instance, but not X-VPN. The service didn't create a native Windows VPN connection, either, instead appearing to route our traffic through a regular HTTPS connection.

As a last-ditch attempt to solve this mystery, we gave X-VPN a chance to explain by sending a protocol question via the '24/7 world class chat support', but two days later there was still no reply. And that was it: we were out of time.

Put this all together and although there's a possibility X-VPN is doing something clever that we've missed, we're currently very sceptical of the 'seven protocols' claim. The evidence suggests X-VPN supports fewer protocols (and lower levels of encryption) than the competition, not more.

Moving on to more practical tests, we found the premium servers offered decent performance, with download speeds of 50-55Mbps to UK servers and 20Mbps to the US on a 75Mbps fibre connection. The free servers reached similar figures, at least during our tests, although it's possible these will fall away at peak times. This is very good, though keep in mind that if X-VPN doesn't have the encryption and processing overhead of a real VPN protocol, this will give it a speed advantage.

Elsewhere, X-VPN's site unblocking talents were also worth having, with the service getting us into Netflix, YouTube and (with the premium plan's UK server) BBC iPlayer.

X-VPN works as a simple VPN for basic tasks, but with no evidence of any real VPN protocol support, we wouldn't use it for anything even faintly important.