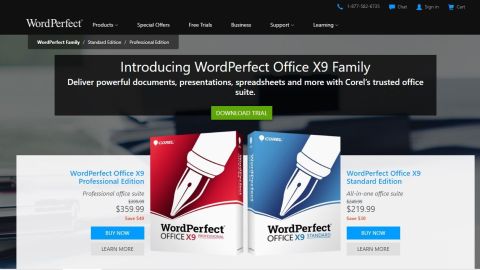 A good suite of applications that offer everything you need in word processing, spreadsheet and presentation tools. You need to try it out to determine if the improvements on offer will benefit your workflow.

When you think of word processor, spreadsheet and presentation software, chances are Microsoft’s Office suite of application probably springs to mind. But even though this behemoth still dominates that space, there are powerful alternatives, such as Corel’s offering.

The latest version is known as WordPerfect X9 and includes WordPerfect, Quattro Pro, and Presentations. The bulk of the changes have been to the word processing app, so this is where we’ll be focussing most of our review. We will not be listing all of the new and enhanced features, but mainly those that caught our eye and which we believe will improve most people’s productivity.

Living in a world where there’s one clear giant, means that you need to make sure the files created with your app can be read by others, and that you can read documents created by other software.

Corel’s compatibility is… ok. It’s not possible to be too critical about conversion features because various formatting cues will be misread, no matter which company is doing the conversion. As a rule of thumb, if your document is formatted simply, like a letter with some bold and italic in places, you can rest assured the conversion process will be pretty much perfect. However the more complex the formatting, the more likely something will get lost in translation.

Which is why it’s often best, if you don’t need the recipient to edit your work, to share your document as a PDF. And with that in mind, all three of Corel’s Office apps allow you to do just that right out of the box.

Editing PDFs is also a possibility, but again, it really depends on how complex the document is. We had great difficulty importing highly formatted files, but just like the conversion feature mentioned above, simpler documents were brought into WordPerfect mostly unscathed.

When it comes to checking errors in formatting, WordPerfect has a pretty big ace up its sleeve with its Reveal Code feature. When activated, you can see all the formatting currently present within your document. From there, it’s an easy matter to fix potentially glitchy formatting errors.

In order to make that section more welcoming, you have the ability to format the font, colour and background to suit your preference. From experience, we do agree that having the Reveal Code section different from the main page makes it much easier to distinguish between the two.

Bulk text formatting is something WordPerfect is pretty good at. There’s a Convert menu that allows you to alter text based on certain parameters. For instance all highlighted text can be turned to lowercase, uppercase, or making the first letter of every word start with a capital. For X9, Corel have introduced a new option, ‘Sentence case’, which adds a capital as needed depending on the sentence structure (ie, a capital is added after a full stop, or an ‘i’ is changed to an ‘I’). Although welcome, it’s a puzzling addition since the version of WordPerfect we used, on Windows 10, already did this automatically as we typed, although it could be useful when working on imported documents.

More welcomed is the ability to alter the speed of the scroll as you highlight text. How many times has this happened to you: you start selecting a section, move down beyond the visible part of the screen, and the page seems to gallop ahead and you’ve highlighted much more than you wanted to. Now, you are offered some control over this process by choosing a scroll speed that is either ‘low’, ‘med’ or ‘high’ (med is the default). The difference is quite noticeable even though the speed choices are limited to three - however this is infinitely better than no choice at all as we’ve had until now.

One new feature that we were surprised hadn’t been implemented before, is the ability to save documents to removable drives. It seems just a basic ability it was surprising that it wasn’t possible until now. Although it does also speak to our own way of working that we hadn’t missed a feature that hadn’t been there until it was pointed out.

And finally if you’re a fan of creating macros and automate your word and data-processing work, you’ll be delighted that WordPerfect now supports Microsoft Visual Basic for Applications 7.1

Not everything is shiny and new - Corel have also spent the time refining some of its existing functionality - like WordPerfect’s hyperlink feature. It is now possible for instance to make use of hyperlinks within a document even when that feature has been deactivated. This is done by clicking a button in the toolbar.

One of the great features of WordPerfect is its toolbars. Some may view them as antiquated, but they’re a well known, and easy way to find commands and options. On top of which, toolbars make it easy to find new features and determine which commands can be triggered with specific keyboard shortcuts. Even better, these toolbars can be fully customised. This obviously has distinct advantages and disadvantages: you can speed up your productivity by creating an environment that is just right for you, but should you then work on someone else’s computer, your skills will then be greatly hampered since nothing is where you expect it.

Some features have been moved around - for the better, like the strikeout and subscript formatting option having been placed in the text property bar, or the ability to see which writing tool is currently selected by glancing at the application bar (a most useful addition if your spellcheck seems to be flagging perfectly well written words - because WordPerfect was expecting to you be writing in German, not English…).

Perhaps our favourite feature is ‘Make it fit’. How often have you tried to squeeze a document within a certain number of pages, only to then struggle with the formatting, margins, etc in order to cram those words in. Well, ‘Make it fit’ is designed to do all this for you. Select your text and WordPerfect will make sure your document will fit as you wish it to. Goodbye straggling paragraphs, hello streamlined document.

Corel’s spreadsheet application got a little attention too. Its Text Wrapping in Cells functionality has been improved and it’s now able to properly recognise dates as you type them in, altering the formatting to suit.

After all these decades of word processors being used to create content, it’s hard to imagine what could be left to introduce to these software packages. All of Corel’s new features and improvements are most welcome and will be sure to benefit many of its users - even though it’s puzzling how some hadn’t been implemented until now.

The WordPerfect suite of applications is only available for Windows, and only if you purchase the software outright - there is no subscription options (which some may welcome as a blessing).

If you’d like to see the difference between each version, you’ll find this chart most valuable.

Office suites are still the bread and butter of many computer users and it’s good to see Corel continuously working to improve its own version. It’s a shame the conversion features aren’t as good as some of us might need them to be - but this is a problem all such programs face.

Overall, all new and improved features are most welcome but they aren’t earth shattering. It may be best to give the trial version a go to see if the changes will affect your workflow in a positive way.