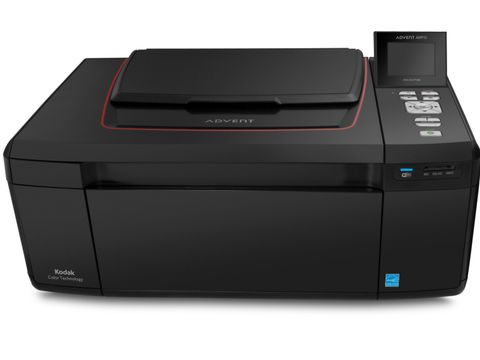 Built by Kodak for Dixons Stores Group, this Wi-Fi-capable multifunction printer is one of three ultra-cheap Advent models released this Winter. The Advent AWP10, reviewed here, costs a penny shy of £70.

The AW10 is £10 cheaper, but uses a 1.5-inch LCD colour screen instead of the Advent AWP10's 2.4-inch display. The cheapest model, the £50 Advent A10, offers the smaller screen and drops Wi-Fi connectivity. These prices are RRP, and may be discounted in-store or online.

The Advent AWP10 uses a two-tank inkjet system, one black and one tri-colour. As always with very cheap printers, it's wise to check the cost of replacement inks before buying.

Given the price, it's unsurprising that the Advent AWP10 isn't overburdened with features. However, if you're only looking for a basic printer, scanner and copier, it has everything you need.

Connectivity is through USB or Wi-Fi 802.11b/g/n, it has a 100-sheet paper tray and, for photographers, an SD/SDHC/MMC/Memory Stick card reader. Build quality is flimsy, but acceptable for a printer of this price.

The Advent AWP10's print speeds are reasonable, without being stunning. A 20-page text document printed in five minutes, ten seconds, which is pedestrian but not sloth-like. A plain-paper, default-settings photo took around a minute, with a high-quality photo-paper print taking almost two minutes, which is pretty speedy.

It's the same story with the print quality; functional and unremarkable, but entirely serviceable and perhaps better than you'd expect given the price of the printer. Text was clear and well defined, though a little grey and washed out. There was a smudge caused by ink on one of the rollers, but only a small one.

Its plain-paper default-quality image printing is less strong, looking washed out and tired. It's a little grainy too, and there's definite banding on the colour ramps.

Being a multifunction device, the Advent AWP10 can scan and photocopy too, tasks it also performs satisfactorally, but with no great distinction.

Where it really falls down is its total cost of ownership. With black ink costing £12 a tank for a stated yield of 250 pages and colour cartridges at £20 for 250 pages, you're looking at a cost per page of 5.3p and 8p respectively, and that's without the paper.

The Advent AWP10 could prove a very expensive economy. It might be cheap off the shelf, but there are plenty of multifunction printers around at a similar price that don't set you back almost half the cost of the printer every time you need a full set of inks.