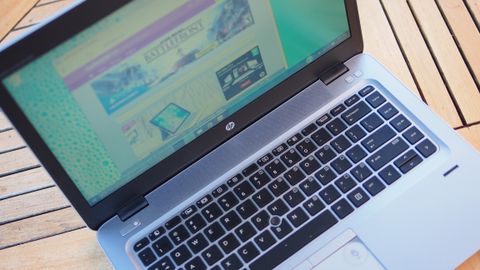 Thanks to the AMD A12 Pro processor, HP is able to deliver top-shelf performance at an affordable price with the EliteBook 745 G3. This mid-range business notebook packs mainstream performance, a comfortable keyboard and nice matte screen in a durable, yet slim metal-clad package.

The EliteBook 745 G3 is part of HP's strategy for offices to help recruit and retain talent. Millennial workers demand sleeker designs that are inspired by consumer products, while IT managers seek security and manageability. The EliteBook 745 G3 is designed to balance those competing needs in a compact, lightweight package.

With a silver, aluminum clad body, HP shows that enterprise laptops don't need to be black box. The silver metal construction gives the EliteBook 745 G3 a solid feel, and the design looks similar to HP's premium consumer-class notebooks, like the HP Envy.

HP's goal in designing the EliteBook 745 G3 is to bring some of the premium features found on the flagship EliteBook Folio 1020 G1 to the mid-range model. For example, even though HP trades the premium unibody construction on the Folio 1020 G1 for a lower price point on the EliteBook 745 G3, you'll still be treated with silver aluminum for the lid, side panels and keyboard deck, along with a durable magnesium alloy bottom plate.

The laptop measures 13.3 x 9.3 x 0.74 inches (33.8 x 23.6 x 1.88cm). The uniform thickness means that the EliteBook 745 G3 is a boxy laptop. However, HP employed clever contouring with the silver paint on the side panels to give the illusion of a tapered wedge-shaped design, making the 745 G3 appear slimmer than it actually is.

Even though the ThinkPad T450s and Dell Latitude e7450 share the same 14-inch screen size, the compact dimensions of the HP EliteBook 745 G3 makes it a whisper slimmer than its rivals.

Borrowing from the EliteBook Folio 1020 G1, the only thing that interrupts the brushed aluminum lid design is HP's glossy silver logo. If you replaced HP's logo with a glowing Apple logo, it would be easy to mistake the EliteBook 745 G3 for a 13- or 15-inch MacBook Pro from this angle.

Compared to the glossy screens found on the premium 13-inch MacBook Pro with Retina and HP's EliteBook Folio 1020 G1, the matte screen on the 745 G3 helps reduce glare and reflection when viewed under bright indoor lighting or outdoors under sunlight. The downside is that the screen isn't flush with the bezel. This makes the screen harder to clean or wipe down, as dirt and dust could get trapped in the area where the bezel meets the screen.

The sizable top and bottom bezels are the biggest gripes I have with the screen. If the EliteBook 745 G3 was a convertible laptop, then large bezels could be forgiven for improved ergonomics when used as a tablet, but since the 745 G3 is a standard laptop, it's unclear why HP didn't reduce the bezel size. Reducing the size of the bezels would have the added effect of reducing the overall footprint of the notebook, making it even more compact.

On the front edge of the laptop are tiny LED lights that indicate network connectivity, power, charge status and hard drive write status. The lights are labeled, but the downward-facing position of the label makes it hard to decipher what each light does.

Even though the key caps aren't contoured and feel flat, the keyboard is highly responsive, with deep key travel. The keys are springy, but sound more dampen for a quieter typing experience than the enterprise-class keyboard on Dell's Latitude E7250 7000 Series.

In some ways, the EliteBook 745 G3 feels like a more premium product than the more expensive EliteBook Folio 1020 G1. Whereas HP chose form over function when it comes to the trackpad on the 1020 G1, the dual-cursor inputs on the 745 G3 makes it feel like an enterprise-class system.

If you're not a fan of the trackpoint, the downside with its placement is that the nub eats into the G, H and B keys, making these keys smaller. Even though the trackpoint design is shared with the Lenovo ThinkPad T450s, the G, H and B keys on the ThinkPad are larger, making typing easier on the Lenovo. I found that I made less typos with the ThinkPad's keyboard design around these keys than on the EliteBook, but I preferred the EliteBook's springier keys.

Another improvement that HP made on the 745 G3 compared to the EliteBook Folio 1020 G1 is that there are physical mouse buttons just below the trackpad. I found the force-sensitive trackpad design on the EliteBook Folio 1020 G1 to be difficult to use. Even though the use is similar to the Force Touch touchpad design that Apple uses on the new MacBook Pro laptops, HP doesn't offer tactile feedback response for when a key is clicked. Having buttons buttons eliminate that problem.

Next Page Specifications and benchmarks