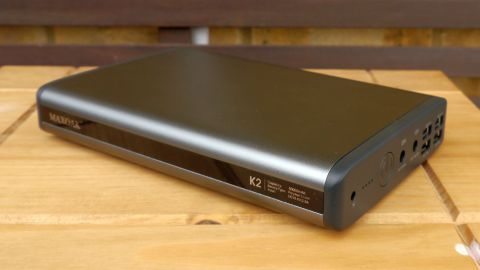 The MaxOak K2 is an impressive piece of kit that’s worth every penny for the target audience. Its 50Ah capacity will ensure that business laptops can run for days without needing to charge at a plug socket.

The MaxOak K2 is named after the world’s second highest mountain, and it’s a fitting moniker that manufacturer KayoMaxtar chose. After all, at 50,000mAh, this is one of the biggest portable laptop battery chargers available, with a literally mountainous capacity.

Just to put that in perspective, the Samsung Galaxy S8 Plus has a 3,500mAh battery, meaning that the MaxOak K2 could potentially charge it more than 14 times over with some juice spare. And the popular Dell XPS 13 laptop could get a whole day’s worth of charge out of this accessory.

KayoMaxtar opted for a metal finish which gives a nice premium feel to the device, but it’s slippery on some surfaces, so gets some self-adhesive plastic feet. All connectors, status lights and the power button are located on one side.

There’s one power-in socket, four white LED lights that give a rough idea of how much juice the battery currently holds, an oversized power button, a 12V@2.5A output, another 20V@3A output, and four full-size USB ports (two at 2.1A and two at 1A).

The latter are arranged in two columns (two per column) and it would have probably been better to have them aligned in the same direction (which would have allowed the engineers to pack in more of them).

So sadly, there’s no USB Type-C connector or any sort of fast charging trickery (e.g Qualcomm Quick Charge) that rivals like the Aukey PB-T11 offer; some smartphones – especially the high-end models – have moved to 9V. However, this accessory does automatically power up when connected with a compatible device.

A word of warning: the 12V and 20V connectors are located near to each other so make sure you double-check before plugging in or you might fry your device. The LED status lights only give a very approximate idea (plus or minus 20%) of the level of charge remaining, so you’re never sure if the battery is completely full (four LEDs) or just about to die (one LED).

Given the size of the device, the K2 can only be charged using a proprietary/dedicated power supply unit rated at 16.8V, 2.5A (42W); there’s no option for charging via a microUSB or USB Type-C port. KayoMaxtar claims that it takes up to eight hours to charge the battery.

Along with the battery itself, you get a protective pouch with a set of laptop adaptors (14 in all), a microUSB cable, and a power cord. The connectors, the manufacturer says, should cover 90% of all laptops on the market, although if you hadn’t noticed, you won’t be able to charge an Apple device or hardware that uses a USB Type-C connector out of the box.

One of the features that explains the bulky nature of the K2 is the built-in overcurrent and low-current protection that should, in theory, automatically shut down the device should there be an issue with the product.

Note that you may not be able to take this battery on a plane because the massive capacity means it’s banned on most if not all flights. At 185Wh, it is above the 160Wh limitation placed on batteries by the FAA (Federal Aviation Administration) over in the US.

Another limitation is that you won’t be able to power laptops that require more than 60W of load power. That includes mobile workstations or gaming notebooks, but also standard laptops with large displays (think 17-inch models). You can still charge these when they’re turned off, but not when switched on – which is more of a safety net than an intrinsic flaw.

A word about the price first: at the time of writing, this device is only available in the UK from Amazon for a whopping £136, with the item being shipped from China. Cheap this most certainly isn’t.

Whether this portable laptop battery is worth buying will depend on your exact use-case. For business jetsetters, devices like the K2 can be a real boon, but its capacity might be problematic depending on where you are travelling (due to airline restrictions on batteries of this size).

There’s also the fact that it is not officially compatible with Apple devices (and won’t charge Dell XPS 13 touchscreen laptops) and is quite bulky by itself – which means that you will be better off leaving it in your checked-in luggage.

We would have loved an integrated cable, a more precise means of displaying the amount of power left (maybe an LCD), a USB Type-C charging option (both in and out), a quick charging feature and perhaps an emergency light as well.

In the end, this is not a battery charger for those looking to power only smartphones or tablets – there are better models (like the Aukey PB-T11) that can fulfil this role.