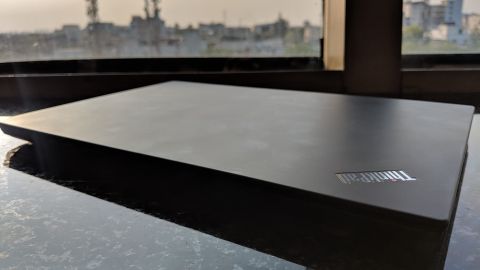 The laptop lives up to the ThinkPad name with its durability and looks. The X280 claims of good battery life, especially in comparison its competitors in the market. A more in-depth review will reveal more about the performance of the laptop, but so far so good.

The ThinkPad has always been known to be the business man’s best friend. The matte black finish and durable exterior exude an aura of power and professionalism. Regardless of whether you love it or hate it, the ThinkPad is akin to a status symbol.

When IBM first came out with the ThinkPad in 1992, it set the standard for what business laptops should be. It handed over the keys to Lenovo in 2005 and it’s not only helped the brand grow but, also diversify. With consumers wanting more portability, launching the ThinkPad Yoga and ThinkPad Twist variants only made sense.

The X-series is meant to epitomize mobility with functionality for the business traveler. It weighs less and looks sleeker than last year’s X270 but the changes extend beyond just the laptop’s exterior.

The ThinkPad has retained its original design by Richard Sapper inspired from Shakodo Bento’s lunch boxes in Japan. The point is to look simple and classy on the outside, but be filled with variety on the inside.

The diversity encompassed in the laptop is apparent with the wide array of ports at its disposal with two USB 3.0 ports, HDMI, a USB Type-C, and a Thunderbolt 3 port. There’s an RJ45 port as well, but it requires a dongle, which unfortunately isn’t included out-of-the-box. And of course, the combo audio jack.

Despite the boxy design, the edges of the laptop have rounded smooth edges and a beveled bottom panel.

The Lenovo X280 is sleek without losing the perception of durability with this year’s model being 13% lighter and 15% thinner than last year’s X270. Weighing 1.1 kgs, it’s not super light but then again that’s never been Lenovo’s style. Its also 12 MIL-SPEC certified, indicating that the laptop clears a sequence of tests meant to assess the laptop’s durability and reliability.

The one thing that’s annoying about the X280 is the fact that the speakers are on the base of the device. The emanating sound is loud but lacks clarity. The heat dispersion vents are divided, with one located on the side and the other on the bottom.

The petite 12.5” screen displays vivid colors with appropriate luminescence. For the short while that it was used, the color reproduction was on point, at least in the case of film trailers with a more in-depth review pending.

The ThinkPad X280 has a unique feature called the ThinkShutter. It’s just a fancy name for a webcam cover but endearing nonetheless.

The matte finish on the exterior is also applied to the keys on the keyboard. It’s easy to navigate but yes, your fingers do feel a little cramped from time to time. That’s not surprising though, considering that all of this is fit onto a narrower framer as compared to the 13 or 14-inch counterparts.

The X280 also retains the signature red nub squeezed in between the G and H keys. It functions as accurately as before but it will take some getting used for new users. The same applies to the trackpad click keys being located along the top rather than the bottom, variating from the norm on other laptops in the market.

The trackpad works well but had issues recognizing three finger gestures like the swipe up on Windows 10. Right next to the trackpad is the laptop’s fingerprint sensor, which doesn’t work as consistently as we’d like.

The review unit has a 8th Gen Intel Core i5-8350U vPro that clocks at 1.70GHz along with 8GB RAM. It has a Samsung 512GB SSD for storage and runs on the Intel UHD Graphics 620 GPU. This basically signifies that the laptop isn’t meant for gaming, which is fine, since its core demographic is the business user.

The overall performance of the laptop so far feels snappy and intuitive but considering that we haven’t been using it for too long, the final judgment will only come out with the final review.

In terms of first impressions, the Lenovo X280 feels solid and worth its salt. It’s nice to see a device retain the features that work and add specifications that actually make the machine feel like an upgrade over its predecessor, at least on paper.

Keep tuned in for a more in-depth review of the device.