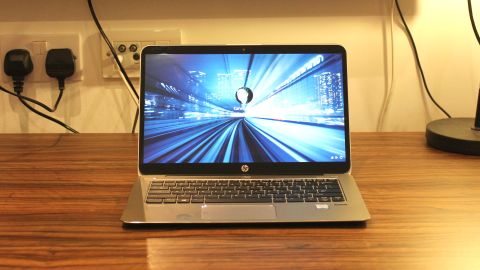 A very pretty business laptop, the HP EliteBook 1030 has nearly everything going for it – just watch out for its curious omission in the connectivity department.

Business laptops are now so thin, light and durable that it's difficult to tell them apart from ones aimed at consumers. At 2.56 pounds in weight, the HP EliteBook 1030 is half a pound lighter than the new 13-inch MacBook Pro and there's a noticeable different when picking it up in a single hand. Better yet, HP's latest machine features most of the ports that the average business user would need on a day-to-day basis – including USB-C.

The HP 1030 decked in classic silver-and-black two-tone colour scheme, with the lid and base featuring a metallic sheen. The lid is absent of anything other than HP's logo, which is unfortunately the company's old one rather than the new one that is appearing on its consumer computers including most recently the HP Spectre 13.

Despite being relatively compact, the 1030 still has a classic laptop design and doesn't pull off any space-saving tricks like the Dell XPS 13 and its near-undetectable screen bezels. HP's machine still has that classic business laptop shape – including rounded corners and a tapered base that gets thinner at the front, MacBook Air-style. Simply put, it's gorgeous.

CNC milled from aluminium, the 1030's chassis feels tough with barely any flex detectable in its case.

Under the hood, HP has equipped the 1030 with a sixth-generation Intel Core m7-6Y75 Skylake processor clocked at 1.5GHz and backed up by 16GB of RAM, along with a 512GB SSD for storage. One of the 1030's leading features is that it operates without a fan. You won't be distracted by the whirring of fans (or indeed a spinning hard disk) – it operates silently at all times, which is definitely a bonus.

Another highlight, the display, is literally one of the 1030's bright points. It isn't quite as bright as the one on the new MacBook, but it isn't far off – appearing equally as vibrant as the 400-nit rated display on Dell's XPS 15. We only had to use it at around 75% brightness indoors, and it's plenty bright to use outdoors on a sunny day.

On the left-hand side are a decent array of ports including a headphone jack, high-speed charging port and a power port. On the back is a Kensington slot, a HDMI port, a high-speed USB-A port and a USB-C connection for hooking up peripherals. Curiously, that USB-C port isn't DisplayPort compatible, meaning you can't hook it up the 1030 to an external display.

For that, you have to use the HP UltraSlim Docking Station, which costs around £189 (around $235) from HP's store and adds a multitude of ports including multiple additional USB-A and DisplayPort ports. It's a strange omission, as it means that, from the laptop, you're limited to outputting to a 4K monitor at 30Hz, or 60Hz at 1080p. Want to take your laptop to a colleague's office and work for the day on a high-resolution screen? Then you'll need to take the dock with you.

We ran into no performance issues during out time with the HP EliteBook 1030, likely owed to the healthy 16GB of main memory under the hood. The score it achieved in Geekebench's Multi-Core test shows just how far Intel's Core-M chips have come. At 6,623 points, it practically matched the the 6,646 points achieved by Apple's 13-inch MacBook configured with an Intel Core i5 Skylake processor.

The EliteBook 1030 features a smooth and adequately sized trackpack, with a well-engineered keyboard. Its individually-backlit keys have sufficient travel and pleasing bounce which helps you type quickly and accurately. After coming from the MacBook Pro, however, which features keys the size of small islands, they feel a little on the small side. All-in-all this laptop is more than up to the task of allowing you to bash out long documents and use it as a machine for serious writing.

The HP EliteBook 1030 ticks nearly every box going for business users. Its sharp design and lightweight nature will draw the envy of your colleagues in the office, but it's not just a pretty picture. With Intel's fanless CPU inside, it runs quietly while offering performance on a par with a Core i5 chip (if you go for the i7 flavour of Core-M, anyway). Its display is pleasingly bright, and you'll have no trouble using its keyboard or trackpad daily. The only blot on its impressive showing, then, is that you'll need to use HP's docking station to use the 1030 at high resolutions at 60Hz due to its reliance on HDMI.