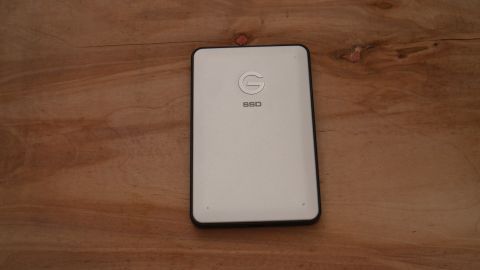 The G-Drive is one of the best external SSDs we’ve tested. It produced a great performance during our benchmarks, and the drive is affordably priced, too.

Despite the rise of cloud-based storage, external drives still remain a popular storage and backup option – especially for PC users – and while the spinning, magnetic type remains by far the most common, external SSDs have been growing in popularity. Mainly thanks to a drop in price coupled with the inherent advantages of SSD technology (low power consumption, faster performance, shock-resistance) make them a no-brainer for some.

G-Technology’s G-Drive is one of the most affordable external SSDs on the market and while it is not as nimble as the Samsung T5 external SSD we reviewed recently, it’s significantly cheaper. G-Technology – not to be confused with G-Tech, the manufacturer of the AirRam vacuum cleaner – is a sub-brand of Western Digital, one of the world’s biggest storage firms, and it’s pegged against Seagate’s LaCie brand.

The G-Drive Slim SSD sent to us for review was the 500GB model with a USB Type-C (USB 3.1 Gen 2) connection, and it’s supremely portable, but not quite as tiny as some of its competitors. At 129 x 82 x 10mm and with a weight of 127g, it fitted quite comfortably in the back pocket of our jeans, but not in the front one.

Available in space gray or silver colors, G-Technology unsurprisingly markets the portable SSD as the “perfect companion for your MacBook”. The device’s chassis is made up of aluminum which guarantees that it will stay cool (yes, even SSDs warm up), and a black rubber bumper runs all round its four edges to protect the drive from accidental knocks.

The USB Type-C connector is located on one edge, next to a status LED light, and there’s a big ‘G’ logo stamped on the front of the drive. Connect it using one of the bundled cables and you’re ready to go as it is bus-powered, thereby eliminating the need for an external power supply.

Here’s how the G-Technology G-Drive Slim SSD performed in our benchmark tests:

The G-Drive carries the same technology found inside the X400: nCache 2.0, DataGuard and LDPC error correction, along with a 160TBW endurance. SanDisk says that nCache has a “multi-tiered caching architecture [that] uses a combination of SLC and TLC blocks to maximize read/write operations and improve responsiveness and longevity”.

The drive needed to be formatted to NTFS before using it on a Windows PC. Out of the box, it is a plug-and-play Mac peripheral that natively supports Apple’s Time Machine. Overall, the drive is a solid performer, outpacing the Samsung T5 and the Adata SE730H in our tests, with some of the fastest numbers we’ve seen to date.

We didn’t have a USB 3.1 Gen 2-capable PC for the benchmarking process so it is likely that the drive’s performance will be higher – G-Technology claims that it can reach 540MBps which is even faster than some internal SSDs! If that wasn’t good enough, the drive also carries a three-year warranty (not five-years like the X400).

Note that unlike some of its rivals, the G-Drive doesn’t come with any additional software. The Samsung T5, for example, was bundled with a 256-bit AES hardware encryption and software suite for Windows, macOS, and Android. There’s nothing like that here.

At the time of writing, the G-Drive costs £115 (around $150) for the 500GB model (Amazon) while the 1TB drive costs £249 or around $330 (Amazon). That translates into a per GB cost of 23p and 25p respectively, making the G-Drive the second cheapest external SSD on the market. Hyundai Technology’s HS750 remains the value leader at 21p per GB, but it is an untested model with barely any reviews on the device.

Samsung’s T5, in contrast, sells for £186 or around $245 (Amazon) for the 500GB version, with the 1TB model going for a whopping £373 or $495 (Amazon), a significant price premium. Samsung’s external SSDs are far smaller but that’s about all you’re getting for the extra cash.

The My Passport from G-Technology’s parent company, Western Digital, costs £175 (around $230) for the 500GB version (Amazon) and £330 (around $440) for the 1TB model (Amazon), significantly more expensive than the G-Drive, despite probably using the same components.

Adata’s SD700, while more expensive and slightly slower, is more portable and is IP68-rated; that’s great for the niche it intends to serve. At £172 (around $225) for 512GB (Amazon), it is an attractive option for those who require something more rugged for their storage needs.

The G-Drive external SSD hits the right price point for anyone looking for a storage device that is both affordable (relatively speaking) and capacious.

Although it was launched more than a year ago, it is still very much competitive with rivals that came out in 2017. It is fast, reasonably well built, and compatible with Apple products, plus it has a faster implementation of USB Type-C.

It would be great if G-Technology decided to produce a mini version of this drive (or even shrink the current one for the 2018 incarnation), while also introducing a 2TB version to compete with Samsung. Making the drive waterproof would be the icing on the cake, but that’s unlikely to happen since it would then be in direct competition with SanDisk products (another sub-brand of Western Digital).