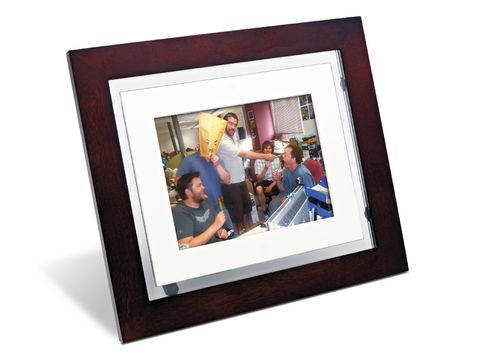 The Pantouch comes with several additional frames, but sadly no additional usefulness

An unnecessary and awkward piece of kit

I have to be honest; I've never really understood the appeal of having a wired screen on your wall to look at photos when you can just print them out, in physical reality, for about a tenth of the price.

The tantalising promise of Wi-Fi connectivity is also let down by the fact that you will need to buy an additional external adapter.

Maybe I'm being too harsh on the Pantouch. The screen is crisp and clear, and it happily accepts inputs from USB and flash devices; and comes with one charcoal and two white additional frames, which is AWESOME.

On second thoughts, I wasn't being that harsh on the Pantouch. It's a frame, that you put on your wall, and unless you know a builder or fancy demolishing part of your house, it's forever going to have a power cable dangling from it. And when people walk past they'll think "oh it's another digital photo frame someone's wasted money on. Why can't they just print out their photos like normal people?"