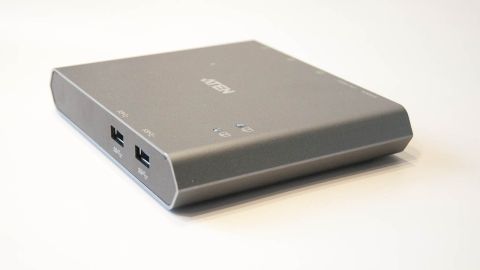 This hardware works well and is well constructed. Our issue is why you would need one? As the KVM part is designed to alternate between a laptop and a phone, and not a desktop system. The lack of an included PSU and the limited number of ports also questions its usefulness.

Portable systems are often fine for viewing content or entering small amounts of data, but most aren’t suitable for a full day of data entry.

The preferred means to make them more suitable for that purpose is to subvert an existing screen and keyboard from a desktop solution by using a docking station.

But what if you want to use a laptop and a phone and switch neatly between them for the input peripherals and monitor?

ATEN has a solution that provides both the docking station and the KVM (keyboard-video-Mouse) parts in a single box, and that’s what we’re reviewing today.

The US3310, as ATEN has designated this device is a small and easily transportable metal box with sloped sides that measures approximately 14 cm wide, 12cm deep and 2.5 cm thick.

Its outer shell is made of extruded aluminium and feels very robust and durable.

On the front are two blue USB Type-A ports that support USB 3.1 Gen 1 devices or older, and on the back are three USB-C USB 3.2 Gen 1 inputs, HDMI out and a 3.5mm jack socket designed for a clickable remote control that is included with it.

Along with the US3310 and remote are two USB-C cables and some basic printed instructions.

The obvious part that contents list is missing is a power supply, as ATEN chose not to include one, confusingly.

You can use any USB-C PSU up to 100 watts to power the device, and charge one device connected to the Dock Switch via 5V, 9V, 15V or 20V output. But if you don’t want the hassle of unpacking the PSU that powers your laptop each time you want to use this hardware, you’ll need to budget to buy another you can leave attached.

The maximum resolution supported by the HDMI is 3840 x 2160 at 30Hz. Unless you have a discrete GPU the performance of this mode for video or rendered moving images isn’t great at 4K resolution, and therefore it is of limited value.

Under HDMI 1.4a lower resolutions are offered, and these might be more productive for those that need to view streamed content or 3D imagery.

In use, this is a remarkably simple device that doesn’t really require any lengthy explanation of the workflow.

Mouse and keyboard can be installed on the Type-A ports, a screen on the HDMI and two devices on the USB-C ports. Only one port has power passthrough, so that’s the one that you might want to put a USB-C charged phone or laptop to get power through the Dock Switch.

With everything plugged in you can toggle between the two devices and get each to have the USB inputs and screen output. There are small LEDs on the top of the Dock Switch that indicate if port 1 or 2 has the focus, helpfully.

For those unfamiliar with KVMs, there is a short delay when switching where the new host system sees the peripherals and connects to them, but this is one of the quicker designs we’ve tested.

More of an issue is that this system uses USB 3.2 Gen 1, previously called USB 3.0, and that has a bandwidth limitation of 5 Gbit/s.

That might seem plenty, and for most users, it will be fine. But if the USB ports are used for connecting external drives and the display is being run through the system, the available bandwidth might not be enough for optimal file transfer speeds.

And, to use other than mouse and keyboard on this device you will need to get a USB hub to chain devices, as they only need USB 2.0 connections to work.

Why ATEN didn’t give this box a couple of USB 2.0 ports and a single USB 3.2 Gen 1 port is curious, as it would have avoided the need for even more hardware to make this solution more flexible.

It also needed to have a LAN port and sound outputs, ideally.

These are often included on docking stations with USB 3.1 Gen 2 or Thunderbolt 3 connections, but bandwidth restrictions here appear to have scuppered their inclusion.

As docking stations go, this isn’t a cheap device even if it is remarkably well constructed.

Some justification for the cost comes from the KVM functionality, but that could be cheaply added alongside a conventional docking station and provide much the same experience.

What we can’t defend is the lack of a power supply in the box, as without this extra the Docking Switch isn’t a permanent installation, and much less convenient to use.

It’s also rather situational from a user perspective because it assumes that the customer will either have a desktop system with USB-C ports or phone they’d like to use a keyboard and mouse with.

Given the Cloud synchronising nature of mobile devices (Phones, Chromebooks, etc.) the need for this type of functionality is limited.

But if you are running a laptop and a phone, and you are keying data into the phone, you may have missed the point of the last twenty years of internet technology, and badly need to reassess your workflow.

We’re not saying that there aren’t reasons you might want to do this, but we can think of many more good ones to avoid it.

In theory, you could use the Dock Switch with a desktop system that has Type-A USB 3.1 Gen 1 ports, but an additional cable not included with this device would need to be purchased.

And, when you’ve bought a PSU, Type-A to Type-C cable and an external USB 3.0 hub this might have the flexibility required but probably at a disarmingly high price.

A good docking station can be bought for much less than $100 and combined with a $20 KVM it will offer much the same functionality as this product, just not as elegantly.

There is nothing wrong with this hardware, as it works admirably. It’s just too niche for most user requirements and doesn’t offer anything special that you can get through other means that are often cheaper.