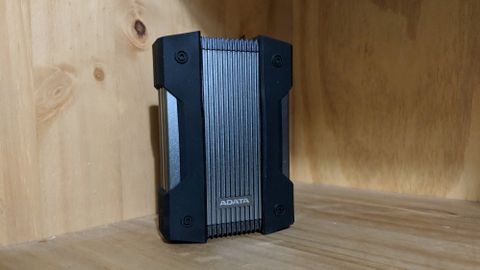 The HD830 is one of the sturdiest hard disk drives we’ve tested to date. It is solidly built and while its performance is nothing shout about, it will be more than sufficient for most tasks.

Traditional external hard disk drives have managed to carve a niche in the storage market and as margins get eroded, vendors have had to come with new ways to maintain profits, which is why we see many storage players - outside of Seagate and WDC - produce ruggedised hard drives.

One player, Adata, has been particularly active in that market maintaining a portfolio of no less than ten devices plus a few external rugged SSDs. The HD830 is the latest model to be released and one that put particular emphasis on its durability above everything else. We tested the 2TB version but it is available in 4TB and 5TB models as well.

This hard disk drive looks like a brick. Really. It houses a 2.5-inch hard disk drive and has been designed in such a way as to protect the latter from any potential shock. The outer layer of the device with fins, grooved probably to maximise surface area to facilitate heat dissipation.

The manufacturer argues that the HD830 is “virtually indestructible” thanks to a “robust” triple-layer construction consisting of a shock protection coating, an aluminum exterior that can withstand up to 3000 Kg of pressure (a claim we have no way of testing in normal lab conditions) and a silicone casing.

There’s a flap that covers the flat USB connector, one that clips firmly in place and allows the HD830 to exceed the IP68 rating. It is both dustproof and waterproof, as it can remain submerged for two hours in two metres of water. It meets the U.S. Military’s MIL-STD-810G 516.6 standard and can survive falls from up to 1.22 meters.

Like for other Adata devices we tested previously, there’s a short USB cable with a Type-A USB 3.0 connector at one end and an old-school flat USB connector on the other. A blue LED lights up to indicate when the device is on and when it is transferring data.

Despite being newer, the drive failed bet the WD Blue drive in benchmarks, hitting 103.2 and 110.4 MBps on CrystalDiskMark’s read/write tests - which is less than a third of what an average SSD can achieve - and scored up to 108.8 and 105.5MBps respectively on the popular ATTO disk benchmark. Its AS SSD sequential read/write scores were 118.1 and 101.3 MBps with a single 10GB file taking 78 seconds to transfer.

The external drive didn’t become warm to the touch during our benchmarks. At 140 x 96.2 x 33mm with a weight of 510g, it is amongst the heaviest non 3.5-inch external hard disk drives we’ve tested to date.

Adata has equipped the storage device with shock sensors that will automatically implement protection mechanisms that will safeguard the user’s data in theory. Spinning hard disk drives are more likely to suffer from damage when subjected to vibration or shock when in use.

Adata also bundles two pieces of software, both of which will turn 10 next year: HDDtoGo allows you to backup from your PC to external HDD, backup external HDD to PC, synchronized backup (updating files to the same version on multiple storage locations), locking your PC, and encrypt using 256-bit AES while OStoGo converts your Windows setup system into a format that can be used on an external hard drive.

The Silicon Power Armor A60 has been tested to the MIL-STD 810G standard and carries a three-year standard warranty. It doesn’t look as ruggedised but at less than $78 (£60) at the time of writing is clearly an attractive alternative especially if you’re on a budget.

The Adata HD710 Pro is the predecessor of the HD710M and is available at a significant discount from the main online retailers, at $98.66 (£72.52). It retains most of the key features of the HD710M; the design, the IP68 sticker, the anti shock sensors and the 3-year warranty.

There’s not much that Adata can do to improve the HD830. The focus of this storage device is maximum protection rather than being the speediest ruggedised device around. And it achieves it in a spectacular manner delivery a hard drive that is and feels solid with almost no compromises. Yes it is big and heavy but better be safe than sorry.

The drive does carry a significant premium (around 55%) compared the cheaper options but the premium price buys you an altogether more sturdy product that is better suited at protecting your data in very extreme conditions. We would love to As always, make sure you have some sort of cloud backup to prevent loss of data.