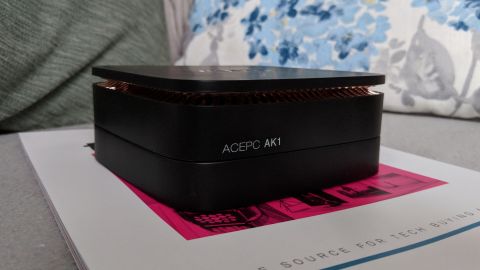 The AcePC AK1 is clearly a clone of the HP Elite Slice, but unlike HP’s product, there don’t seem to be any plans to add more modules, which removes the very reason why the AK1 exists in the first place.

It’s difficult not to think of Acer and HP when you come across the AcePC AK1. The latter borrows some ideas from the likes of the HP Elite Slice and the Acer Revo Build M1. The visual similarities with the former are particularly striking, but there are some big differences, especially when it comes to pricing.

Online Chinese retailer, Gearbest, sent us the sample and sells the AcePC AK1 for £107 ($150) at the time of writing. Use the coupon: TRACEPC at check out to get this price. The coupon expires on 2018-03-31. Note that, while this price includes delivery, it is exclusive of any taxes that may be levied by HMRC or the courier companies on behalf of the vendor. Want to buy tech from online Chinese retailers? Read this first.

The AK1 is bigger than expected, especially on the z-axis, with a 56mm thickness.

That’s partly due to AcePC’s odd decision to add what HP calls a ‘slice’, a detachable unit that adds some specific functionality to the base unit.

On HP’s version, that can take the form of a wireless phone charger, VESA plates, an optical reader or a Bang & Olufsen-powered HP Audio module (just note that we’re not a big fan of the whole modular PC concept).

In the case of the AK1, there’s only one available module, and that’s a 2.5-inch external hard drive bay that connects to the main unit using a USB Type-C connector. At the time of writing, there are no plans – at least on AcePC’s website – to bring more modules out.

Which brings us to the first major design problem. There’s no real good reason to have an external hard drive shoehorned in like so, at least not for most users.

The drive is likely to be bottlenecked by the USB bandwidth, and eliminating this HDD module would have saved both on the bill of materials, complexity of design, and cut down the size of the PC. Instead, a device like the Vorke V1 might be a better alternative if you’re looking for a host that can accommodate a 2.5-inch HDD.

Like HP’s Slice, the AK1 uses a very distinctive copper-colored heat exhaust. There are four full-size USB ports (two USB 3.0 models), two USB Type-C connectors (one of which is located underneath the PC), a proprietary power port, a full-size HDMI connector, a Gigabit Ethernet LAN port, an audio input and a microSD card slot.

The hard disk expansion module can be removed easily by unlocking it and then pulling. Adding the hard drive requires you to remove two screws and plug in your SATA hard drive. Note that there’s no VESA mount option.

Here is the AcePC AK1 configuration sent to TechRadar Pro for review:

The Celeron J3455 processor that powers the AK1 is a quad-core (four-thread) CPU from the Apollo Lake family. It has a low power dissipation at 10W and supports up to 8GB of RAM. You get 4GB of system memory with no upgrade path as the memory is soldered on-board, sadly.

Storage is eMMC-based (Hynix/Kingston) and there’s only 32GB of it provided. A significant chunk of this is occupied by Windows 10 already, with precious little left for anything else. On the wireless front there’s Bluetooth and 802.11ac Wi-Fi courtesy of an Intel 3165 part.

Not surprisingly, this PC uses a rather beefy (but not chunky) 12V,2.5A (30W) power supply unit, a clear indication of how power-hungry the parts inside the AcePC AK1 are.

Switch the machine on and a blue light glows from underneath the exhaust vent.

Here’s how the AcePC AK1 performed in our suite of benchmark tests:

This is nice, but distracting if you want to use it as an office PC. Soon though, we noticed how noisy the AK1 was – the fan randomly fired up and produced a very annoying whir regardless of whether the device was under load or not.

The Beelink M1 is cheaper by about a tenner and sports twice the amount of on-board storage. It manages to do so by adopting a slightly slower CPU – the Celeron N3450. There’s no SATA connector though and the only expansion slot is an M.2 one. Furthermore, it’s worth noting that it also has a legacy VGA port for older monitors.

At more than £200 ($275), the Kodlix N42 is a far more expensive piece of kit but with a justified price tag. It runs a more powerful CPU, the N4200, and comes with Windows 10 Pro (rather than the usual Home variant). In addition, it is one of the very few systems to boast both a USB Type-C connector and a legacy VGA port. That’s on top of two memory slots, a SATA port, as well as an M.2 connector.

The AcePC AK1 suffers from some design decisions that knock it down a few spots in the pecking order of HDD-friendly mini PCs. The Vorke V1 and the V1 Plus remain our firm favorites thanks to a combination of great pricing, bigger/better primary storage and a legacy VGA port.

The AK1’s external hard disk enclosure has little reason for existence, and the 32GB on-board storage doesn’t leave much room for anything else once Windows 10 has eaten up its installation space. As for the annoying fan noise, there’s little to be done to mitigate it, sadly.