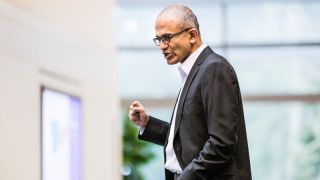 Although Microsoft has increased the number of African American and Latino employees that make up its 100,000-person ranks, the number of women working at Microsoft actually decreased by 2.2% compared with last year.

Nadella told investors that his company is focused on improving diversity, and that Microsoft has been requiring its employees to take "unconscious bias" training in order to ensure that innovation and hiring decisions are made based on merit, and not because of cultural bias.

Nadella said Microsoft is "not where we want to be," in terms of gender and ethnic hiring. "Everything at Microsoft starts with our mission, and we want to talk about empowering the world and empowering every person on the planet. It has to start with diversity."

The Reverend Jesse Jackson also took the stage at the investor meeting and scolded the tech industry for its lack of diversity.

"The tech industry has made very little, if any, progress in cracking the code to transform the character and composition of their workforces, to break with old patterns of exclusion," Jackson said.

However, Jackson praised Nadella's commitment to diversity by writing on Twitter, "Your push is very welcomed."

In addition to poor diversity numbers at Microsoft, where 73% of employees are male and 60% are white, Nadella also made a boneheaded comment last year that drew the ire of equal pay activists.

Speaking on the subject of gender diversity, Nadella suggested women shouldn't ask for raises and instead trust in karma that equal pay would come their way.

The comments were offensive enough that some groups asked for Microsoft to fire Nadella.