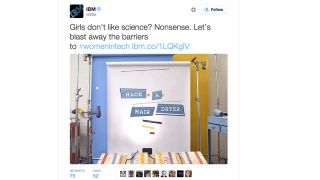 IBM have accidentally started a social media backlash as its initiative to encourage more #womenintech by hacking their hairdryers offends many already in the field and beyond.

Women have replied with a wide range of criticisms, from the "do better" to the outright offended.

". @IBM One of the barriers to women in STEM is patronizing stuff like this... you don't have to tie STEM in to cosmetics/hair care." - via @MissSinBin on Twitter

Commenters have stated their dismay at the tone and supposition that women need "girly" things to be encouraged into the technology fields whilst presumably men simply have to be enticed to modify a ping pong table, because, sports.

This encapsulates the problems facing women in technology. When the people asking for more women have no idea how to approach or encourage them, you know there's a much bigger issue than previously thought.

IBM will have to do some damage limitation to stem the tide of vitriol from their social media fail, but will it be enough as the company have outed themselves as rather clueless when it comes to understanding the women they seek to encourage.