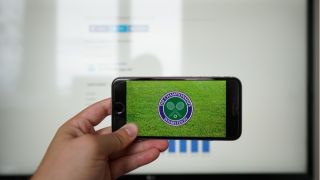 With this year's Wimbledon 2019 men's final set to bring two of the sport's heavyweights together on Centre Court later today, fans all around the world will be tuning in to get a glimpse of the action.

But both within SW19 and across the globe, tennis fans have been able to benefit from a hugely boosted amount of action from this year's championships.

This is down to the huge amount of hard work and innovation put in by the All-England Lawn Tennis Club (AELTC) and its technology partners, chief of which remains IBM.

The two organisations have been working together for 30 years to bring technological innovation to the Wimbledon Championships, and 2019 is no exception.

"If you think of Wimbledon, they think of themselves first as a tennis club, but they also increasingly think of themselves as a data driven media business, because that's how they operate," says Sam Seddon, IBM Sports and Entertainment lead for the UK, told TechRadar Pro when we got to visit the 134th Championships recently.

"(The AELTC) like to describe this as like like putting on a wedding - you have to have the highest quality on the biggest day of your life. But they're inviting half a million people, and streaming it to 20 million people online - then doing it 13 days in a row."

IBM has a dedicated team working across the Championships each year, housed in the company's high-tech "bunker" within the Wimbledon media centre. From here, IBM staff work with the AELTC to ensure visitors to the site, as well as the Wimbledon mobile app and website, receive the best customer experience possible.

"At the championships this is the room where we're managing all our cloud, our security and delivering all the digital experiences," Seddon says.

"This is the foundation of what we do."

The AELTC has stood ahead of many other sporting organisations in taking ownership of its action, and promoting it to fans online and via mobile devices. Its Wimbledon.com site receives millions of hits during the championships, as well as other more unwanted attention, with Seddon noting that IBM helped block over 200 million cyberattacks on the site with its 24/7 cyber-protection.

Seddon notes that for many fans these days, giving over their personal data needs to come with a promise of high-quality content, and that is something Wimbledon looks to provide in spades.

Every match comes with dedicated video highlights on the Wimbledon.com site, and fans can keep up with point-to-point action in real-time online, as well as receiving alerts and in-depth information on their favourite players.

These three-minute match highlight packages feature one of the newest IBM tech additions, with the company's Watson AI platform now able to spot particularly exciting points or incidents by measuring the noise of the crowd and the movements of the players themselves.

The new Watson Acoustics analytics can detect exactly when the ball has been struck, allowing the AELTC tighter cropping of highlight clips, saving vital time and maximising every second of rights footage.

The system can also use Watson Open Scale to recognise levels of crowd noise and excitement levels of the players themselves. This will reportedly allow it to remove bias when searching for highlights from players with a particularly vocal following or those who are particularly animated on court.

Seddon notes that many highlights packages on Wimbledon.com are now almost entirely compiled by AI, with a sign-off from a human digital editor, marking a huge step forward in getting the action fans demand online quicker.

Mobile interaction has also seen a major rise in recent years, with fans flocking to get the latest news on their handheld devices.

IBM helps the lights stay on thanks to a hugely-powerful cloud computing system that helps deal with the demand each year's Championships bring.

Seddon notes that IBM now utilises containerisation to offer "continuous availability" of all the key information, pushing data across multiple locations to ensure the website remains online - even with the 55,000 percent increase in traffic it sees over the tournament fortnight.

So even though the Championships itself may stay steeped in tradition, both Wimbledon and the AELTC can be safe in the knowledge that they are helping push forward sports technology in many ways.