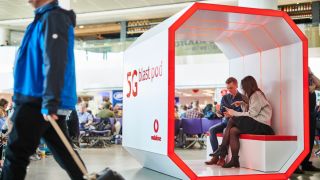 Killing time waiting for a delayed flight could soon be more fun than ever after Vodafone revealed it has connected the UK's first 5G network in an airport.

The operator has today switched on its superfast network at Manchester Airport as part of a trial ahead of a wider launch next year, allowing travelers an early taste of 5G as the countdown to a global launch next year continues.

Visitors to the airport's Terminal One were invited to Vodafone's 5G "blast pod", where they were able to download and enjoy video content in super quick time, enjoying speeds up to four times faster than 4G.

Vodafone sees the trial as another stepping stone to its efforts to be a 5G leader ahead of a wider 5G launch next year, and is also a part of Manchester Airport's own £1bn digital transformation program.

The company successfully tested 5G spectrum across a live network in April 2018, and has now installed 5G masts at Manchester Airport. With 5G handsets not yet publicly available however, the trial was enabled using one of Vodafone's 5G-enbaled ‘Gigacube’ portable router devices.

Consumers connected to the trial network via the Gigacube, which was equipped with 5G with Active Antenna (or Massive MiMo) technology, creating multiple 5G ‘motorways’ from one antenna, which are then beamed to a 5G router to create a fixed wireless access connection for many users.

“We all love to catch up on our favourite TV shows, play games or finish off some work when travelling," said Nick Jeffery, CEO, Vodafone UK. "5G, with its fast speeds and quick response times, will make that quick and easy, even in busy locations. We are proud to be the first provider to bring 5G to an airport and will be adding more major travel hotspots to our 5G network throughout the year.”