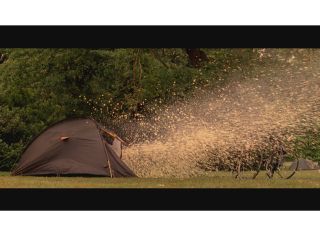 A TV advert for Film to Go is coming soon, featuring this relevant frame

Orange customers will be able to download a free film every Thursday with the network's new scheme called Film To Go.

Every week, Orange mobile and broadband users can nab a film from iTunes and watch it on a computer, iPad, iPod Touch or iPhone for up to 30 days.

You won't be able to enjoy any old film you fancy, though; Orange has put together its own roster of films for the launch, including The Wrestler, The Ghost and Che: Part One – not exactly a laugh-a-minute line-up.

Every Thursday will bring a different film with it and you'll need to text 'filmtogo' to 85060 or use the new Orange Film To Go app to get the code needed to download it.

"We know Orange customers love film," said Spencer McHugh, Orange's brand director. "So adding the Orange Film to Go service to our existing portfolio of film offers is hugely exciting for us."

A word of warning: each film will be over 1GB in size, so make sure you only download it over Wi-Fi rather than eating up all your data allowance and more in one go. Otherwise you might as well, you know, buy the film.