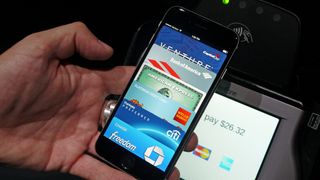 How do I pay thee? Let me count the ways…

Actually, would you rather I didn't? Last year saw the launch of so many different payment services that it's practically impossible to list the different ways that businesses can now process payments, consumers purchase goods, or people transfer money among their friends and family.

Adoption of digital payment methods is ultimately good news for businesses that want to sell through apps: it shows that consumers are willing to trust their cash to the devices that are reshaping consumer behaviour and creating opportunity for digital leaders.

For example, our recent research shows that 85% of smartphone owners in the UK report that phones or tablets have changed the way they shop, while three-quarters say they would be more likely to shop at a store offering key functions and services via an app.

But while options for making purchasing easier and more intuitive are to be welcomed by enterprises, they do raise the question of how to support so many competing payments systems. This is a key question on which the further progress of the app economy hinges.

The future may lie in converged payments, but for the time being businesses and consumers alike must learn to cope with a truly bewildering array of payment methods. That's less of a problem for the ordinary smartphone user, since many apps for transferring money among individuals are based on the user's phone number to link to their bank account.

For businesses, the problem is not just how they can support the myriad methods of mobile payments that consumers now expect, but how to integrate them into their existing and future apps – especially given how quickly the mobile payments landscape is changing.

So much effort goes into designing and building a successful app (and, before that, of building a winning application strategy), that apps are under enormous pressure to 'pay their way'. Clearly, integrating payment options that fully meet consumer needs within an individual app is the only way that businesses can provide the single-touch payment which consumers have come to expect from their mobile apps.

Fortunately, there are payment technology specialists that help organisations to integrate a wide range of the most popular (and, indeed, the more esoteric) payments technologies into their business processes. Enterprises must understand, however, that these services are not 'bolt-on'. You can't simply design an app, and add new payment functions on an as-needed basis.

Today, both apps and payments methods are complex beasts, with functions such as analytics being central to their design. The result is that an app must be tightly integrated with other elements of the ecosystem in which it functions, whether that's business databases or third-party payments services.

This applies as much to payments as it does to any other aspect of an app – these need to be integrated during the design stage of the app. This is only possible by facilitating communications between app developers and third-parties such as payments providers; in particular, by providing access to crucial business data on which these apps are based.

It's no surprise, then, to see payments specialists such as First Data deploying application programming interfaces (APIs) which enable technology partners to open up their systems and data to application developers (and vice versa).

As well as speeding up the development process, APIs enable developers to incorporate the different payment methods seamlessly into their existing apps – brands can control the design of the payments screen and ensure that users can complete transactions within the app itself. What's more, it gives businesses the ability to monitor transactions live and integrate the data into their own customer analytics programmes – including those tied to 'adaptive' apps that learn from each customer interaction to improve the service that they deliver to users.

This is just one example of how businesses are realising the benefits of partnering with specialist technology providers to bring the best out of mobile apps. Apigee's research has shown that the most successful app deployments are by those companies that take an 'outside-in' approach to app development, working proactively and expansively with outside partners to develop and build their apps.

In a survey of 800 IT decision makers in large enterprises across eight countries, those who described their approach as outside-in were much more likely to be exceeding expectations for delivering quality apps on time, on budget, and to the intended business effect.

Four of a kind

Just as payments technologies are not a bolt-on, businesses must also understand that APIs should not be seen as some kind of 'click-and-forget' software plug-in. Instead, organisations need to adopt an architecture that fully supports four types of API communication: app-to-client, app-to-backend, app-to-app and, finally, the exploded app built from micro-service APIs.

This architecture not only enables apps to be built in an agile fashion, deployed at scale and compatible with future devices, it also means that apps can be easily connected to every other application inside and outside the enterprise – such as payments platforms.

For many businesses, apps are the centrepiece of their digital transformation initiatives. Those that embrace the wider application ecosystem of app developers and specialist technology providers (such as payments platforms) will find that taking an outside-in approach to their application strategy will pay dividends.