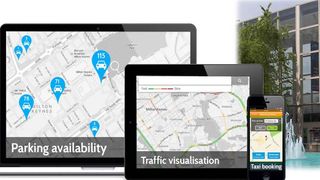 Smart cities? To anyone stuck in an overcrowded, traffic-clogged, polluted British city, they sound a great idea. The name itself speaks of efficiency, speed, cleanliness and a number of things.

Those of a certain age will remember a TV ad of the 80s that promoted the benefits of living in Milton Keynes, making it look like some idyllic semi-rural paradise. Indeed Milton Keynes used to be presented as a sort of ideal for how cities should be but, as anyone who’s been to Milton Keynes knows, the reality is very different.

But that’s not to knock the idea of smart cities – everyone has a vested interest in making cities run better, for traffic to move faster, for citizens to be more connected.

There were two initiatives this week that demonstrated that the concept of smart cities hasn’t been completely forgotten.

First of all was the Smart City Expo World Congress, an event held in Barcelona that highlighted some of the possibilities. Not all of them were mobile or wireless based – there were presentations on concepts such as e-voting and other elements of citizen participation – but there was plenty of interest in technologies such as IoT and connected vehicles.

Particularly, noteworthy was the pledge by Cisco to invest $1 billion in a new program for smart cities. Tying up with two financial institutions, the aim of this was to ensure that a lack of funds wasn’t a stumbling block for future urban developments. “Funding is a major stumbling block for municipalities beginning their smart city transformation,” said Anil Menon, global president of Cisco’s Smart+Connected Communities. “With our partners, Cisco will bring the capital and expertise it takes to make smart city projects a reality.”

The type of project that Cisco is talking about include schemes to reduce energy usage or better parking and public transport initiatives, the scheme could be used for creating revenue sharing opportunities, meaning that some initiatives that had previously thought to be uneconomic could now get the go-ahead.

The second event that put smart cities back on the map was the budget speech from Philip Hammond. It’s true that he didn’t actually use the phrase itself but the whole speech smacked of ways to transform urban living. Much attention was given to his desire to get more driverless cars on the road by 2021, the technology being seen as key to his vision of the future.  “There is perhaps no technology as symbolic of the revolution gathering pace around us as driverless vehicles,” he said ... before putting his money where his mouth was.

But that wasn’t all: the £1.7 billion for the Transforming Cities Project will also help improve the lot of city dwellers and, underlying it all, was the promise of the additional funds for 5G – because how can we have smart cities without connected cities?

And that’s the main problem with the whole smart city concept. It’s a great idea in theory but, to work properly, it needs the basic infrastructure. It needs 4G for a start – with the move to 5G round the corner, it needs city centre wi-fi so that projects based around IoT can really benefit.  As Cisco intimated with the introduction of its smart cities fund, it’s not really the technology that’s lacking,it’s the funds to change the world.

And what of Milton Keynes, that vision for the future for urban living? Milton Keynes is actually one of the closest examples of a smart city that we have in the UK. Its MK:Smart project, a three-year initiative that looked at ways in which technology could be used to improve the city came to an end this summer, with no clear idea what the future will hold.

There have been some exciting initiatives: a wireless-based scheme to improve parking and a driverless pod project. But there’s plenty more that can be done.

Recently, the MK:Smart head Geoff Sneldon decried the disconnect between technology and finance. In an interview with Public Technology, he said “The smart-city movement is going through a testing, searching time. There are exciting use cases, but not too many strong, tangible benefits,”. All the big vendors are going round asking why people aren’t buying their products, and we are saying: ‘when can it be demonstrated [at scale]?’ Everyone knows it could be great – but I cannot buy a promise. I can enter into a conversation that can explore something but, if I want to commit public money, I need a decent prospect of return.”

For all Hammond’s talk of an exciting period, this is the issue that lies at the heart of many of the smart city initiatives. For us to see a real period of transformation, it’s not a question of a few million here and a few million there, it needs some innovative thinking to work out ways in which ground-breaking initiatives are funded. And that means communication between the mobile operators, the software companies, the banks, local authorities and national government – that’s an uneasy collection of different interests but it’s what needed if we really want to be smart.