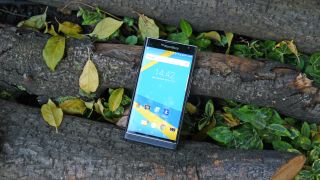 In partnership with PC World Business

When rumours of an Android-powered handset from BlackBerry emerged, many were wondering whether the company would be bold enough to abandon its own OS to embrace the ubiquity of a rival platform. The answer, we now know, is a resounding yes, and the handset has a name: the BlackBerry Priv.

The Priv, which the techradar phone team hailed as the best BlackBerry smartphone in years, will get heads turning, especially in the enterprise market, where the demand for Android devices is growing but the choice of handsets is, well, quite limited.

And here are some reasons why the Priv may well be the best Android business smartphone yet.

BlackBerry may have adopted Android as the underlying OS, but that doesn't mean it has forgotten its BB10 roots. The Priv also brings onboard a number of features that were popular on BlackBerry's previous handsets, features like default encryption, the BlackBerry Hub, BB messaging and the BB calendar.

Many will appreciate the BlackBerry content transfer app, which facilitates the move from your existing smartphone to the Priv. Everything is tightly tied to Android but still has a distinctive BlackBerry 10 flavour. The one core message that hasn't changed in the operating system switch, however, is BlackBerry's unflinching commitment to security.

The reason why BlackBerry jumped to Android has not because it's 'better' than BB10; the two OSes have their pros and cons. No, BlackBerry made the Android move because Android is the OS with the biggest market share in mobile, with more Android users in the world than Windows ones.

As part of the Android ecosystem the Priv will get all the Android updates, just like the competition, and that includes the latest version, Android 6.0 Marshmallow. So making the jump to the BlackBerry Priv isn't a daunting prospect, as this is familiar territory. There's the Google Play Store, Maps and a flurry of other applications that have been the default ones on Android for a few years already. You can, of course, install your own as well.

Your CxO will approve it

Did you say secure? BlackBerry has long been associated with enterprise mobile security, and the company not only talks the talk, but walks the walk, as it recently left a country whose government wanted to monitor its communication.

Furthermore, BlackBerry will be the first mainstream Android smartphone vendor to offer not only monthly security updates, before even Google pushes them, but also hotfix patching and enterprise-managed updates via the BlackBerry Enterprise Server (BES) and OTA management systems. Add in the hardened kernel and a "hardware root of trust" with the silicon providers and manufacturing process, and you get a smartphone that goes the extra mile to make your content secure.

It has a keyboard!

The BlackBerry Priv is the only mainstream Android smartphone since the HTC Desire Z to have a physical keyboard, one which it inherited from the BB10 range. While this will definitely appeal to existing BlackBerry fans who are eager to try a more universally accepted OS, an actual keyboard could also wow a new generation of users for whom writing an email on a smartphone has always involved tapping on a glass pane.

A proper keyboard means that you can finally use the entire screen for work or leisure, rather than just a fraction of it. Now if somehow BlackBerry could bring out a dual-slider device, with a keyboard that can be pulled from either the side or the bottom, that could spice things up even more.

Let's be honest: BlackBerry smartphones have never really been known for being stunners. The BlackBerry Passport divided opinions over its form factor because of its girth, while previous models had, in most cases, anonymous designs. Not the Priv. It managed to blend practical features, like the keyboard, with aesthetically pleasing, functional ones like its 2.5D curved screen.

But it's not only about looks. BlackBerry didn't pull any punches when it came to the hardware specs for the Priv. The phone matches the best handsets on the market with welcome extras like a larger battery, a microSD card slot or that Schneider-Kreuznach certified camera, which boosts an 18-megapixel resolution.