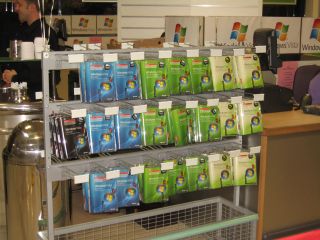 Windows Vista has sold more than 20 million copies since release

Wow. That's what we said when we looked at how much money Microsoft raked in last quarter. Nearly $15 billion (£7.5 billion) in revenue - that's nearly a third up on the year before. Of course, the giant is attributing most of this to fabulous sales of Windows Vista . Nearly $5 billion (£2.5 billion) of that figure is pure profit.

Ah yes, the new dawn that was the dual-launch of Vista and Office 2007. Or could it be that UK copies of Vista just cost so much cash that we're ballooning the profits for the whole shebang. Microsoft has previously admitted that Vista cost $10 billion (£5 billion) to develop.

Microsoft's chief operating officer, Kevin Turner, was understandably elated. "This quarter marked the consumer launches of Windows Vista and the 2007 Microsoft Office system, and we are delighted with the positive customer response these products have received."

Microsoft expects to rake in around $57 billion (£28.45 billion) before the end of the next financial year.